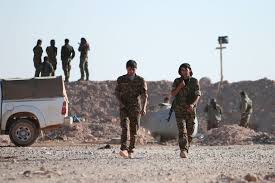 U.S.-backed forces said on Saturday they had seized a major natural gas field in Syria’s Deir al-Zor province from Islamic State militants in rapid advances since the start of an operation earlier this month to capture areas east of the Euphrates river.

Commander Ahmed Abu Khawla told Reuters that the Conoco gas field was the first of its kind taken by the Syrian Democratic Forces (SDF), an alliance of Kurdish and Arab militias, since it began an offensive earlier this month to capture the eastern province.

“This is the first gas or oil field in the campaign which we have liberated,” said the commander of the group whose campaign is in parallel with an ongoing battle for the nearby Raqqa city.

The Conoco field is named for the American company which discovered the gas reserves and built a processing plant there. It has been the target of U.S. strikes and was used to supply cooking gas canisters for household use. Before the conflict it supplied gas to power stations.

In Deir al-Zor, Islamic State is battling two separate offensives, one launched by the SDF and the other by the Syrian army and its allies.

The assaults by the Russian-backed Syrian army and the U.S.-backed SDF have at times raised fears of clashes that could stoke tensions between the competing world powers.

Islamic State’s last major stronghold, the cities, towns and farms in the fertile strip along the Euphrates are fast becoming the focus of Syria’s war.

The views expressed in Op-Ed pieces are those of the author and do not purport to reflect the opinions or views of Libyan Express.
How to submit an Op-Ed: Libyan Express accepts opinion articles on a wide range of topics. Submissions may be sent to oped@libyanexpress.com. Please include ‘Op-Ed’ in the subject line.
ISISISSyeiaUS
Share
Submit a Correction
Sign up for our Newsletter.