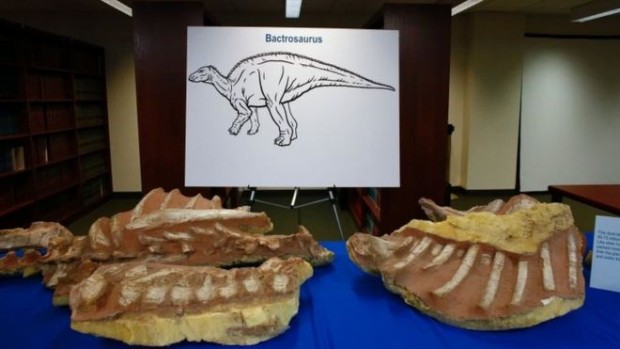 The US has returned a collection of dinosaur eggs and other fossils to Mongolia after finding they had been smuggled out of the country.

The collection includes the nearly complete skeletons of Bactrosaurus, a nest of Protoceratops eggs, and the very rare skull of an Alioramus, which was related to the T-Rex.

The skull was confiscated after it was shipped into the US with false papers.

The US has returned 23 dinosaur fossils to Mongolia in the last three years.

Other items returned in this shipment included a Psittcosaurus skull and a Protoceratops skeleton.

US customs officials said the rare Alioramus skull, believed to be around 70 million years old, was part of a shipment put on sale on eBay by a French dealer.

It was shipped into Newark, New Jersey in 2014 with papers claiming the items were replicas and from France.

But the fossils were later confirmed to be real and to have come from Mongolia.

In 2013 the US returned more than a dozen illegally smuggled dinosaur skeletons to Mongolia, including Tyrannosaurus bataars and Oviraptors.

Mongolia has some of the largest dinosaur fossil beds in the world.

For: US gives back looted Mongolian dinosaur fossils