Water on the Earth’s surface has shifted place 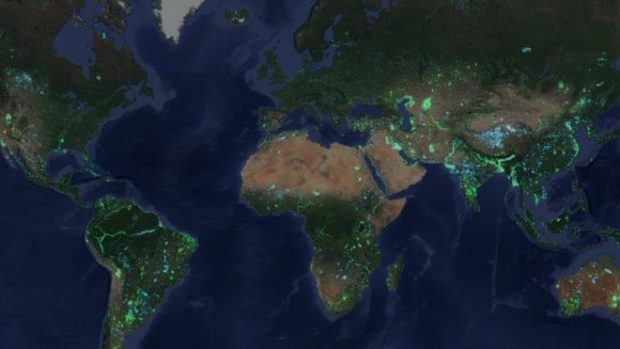 Scientists have used satellite images to study how the water on the Earth’s surface has changed over 30 years.

The largest increase in water has been on the Tibetan Plateau, while the Aral Sea has been the biggest conversion of water to land.

The team said many coastal areas have also changed significantly.

The research, carried out by the Deltares Research Institute in the Netherlands, is published in the journal Nature Climate Change.

The researchers analysed satellite images recorded by Nasa’s Landsat satellites, which have observed the Earth for decades.

They were able to monitor changes in the Earth’s surface down to a resolution of 30m, which can be seen on the Deltares Aqua Monitor.

The team found that vast areas that were once land are now submerged beneath water, with the largest change occurring in the Tibetan Plateau, where melting glaciers are creating huge new lakes.

An increase in the number of dams was also boosting water cover, and using the satellite data, the team was able to detect previously unreported constructions.

Dr Fedor Baart from Deltares said: “We started to look at areas that had not been mapped before.

“We knew in Myanmar that several dams were being built, but we were able to see how many. And we also looked at North Korea, and we found dams being built there just north of the border from South Korea.”

Conversely, the researchers also found that even larger areas of water have now become land.

The biggest transformation was seen in the Aral Sea in Central Asia. What was once one of the largest lakes in the world has now almost completely dried up after engineers diverted rivers to irrigate agriculture.

The researchers said Lake Mead near Las Vegas, which is the largest freshwater supply in the United States, was also losing water, and 222 sq km (85 sq miles) of it was now land.

“We expected that the coast would start to retreat due to sea level rise, but the most surprising thing is that the coasts are growing all over the world,” said Dr Baart.
“We’re were able to create more land than sea level rise was taking.”
Image copyright deltares
Image caption In Dubai, the creation of new islands has significantly altered the coastlin
The researchers said Dubai’s coast had been significantly extended, with the creation of new islands to house luxury resorts.

“China has also reconstructed their whole coast from the Yellow Sea all the way down to Hong Kong,” sid Dr Baart.

Some areas, such as the Amazon, saw almost equal amounts of conversion of land to water and vice versa because of the natural movements of the river system.

The team says more work now needs to be done to see what impact these global changes may have.

For: Water on the Earth’s surface has shifted place