Wildfire in Canada burns an entire neighbourhood, expected to double in size 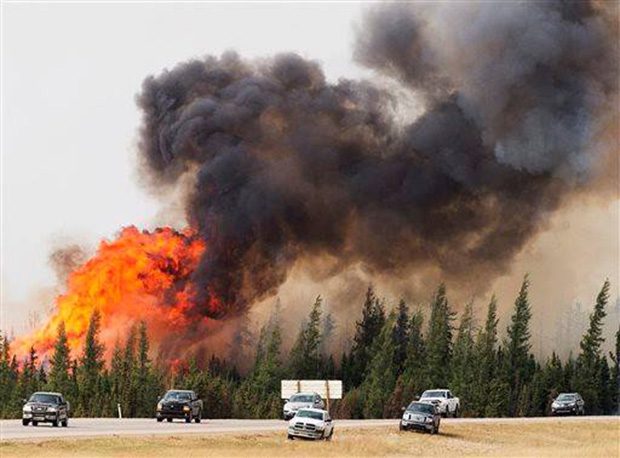 The images are ones of devastation — scorched homes, virtually whole neighborhoods burned to the ground. And Canadian officials say they expect to fight the massive wildfire that has destroyed large parts of Alberta’s oil sands town for months.

There’s fear the growing wildfire could double in size and reach a major oil sands mine and even the neighboring province of Saskatchewan.

The Alberta government said the massive blaze in the province will cover more than 200,000 hectares (494,211 acres) by Sunday and continue to grow because of high temperatures, dry conditions and high winds. Chad Morrison of Alberta Wildfire said it’s not uncommon to fight such an inferno in forested areas for months.

Morrison said the fire was burning away from communities this weekend. He expected cooler temperatures and they could get rainfall Sunday, but significant rainfall is needed. Environment Canada forecasts a 70-percent chance of showers late Sunday and overnight.

Officials had hoped to complete the mass evacuation of work camps north of Fort McMurray on Saturday. Thousands of displaced residents got a drive-by view of some of the burned-out neighborhoods as convoys continued. No deaths or injuries have been reported since the fire started last Sunday.

For: Wildfire in Canada burns an entire neighbourhood, expected to double in size