IOM issues report on migrants situation in Libya during June 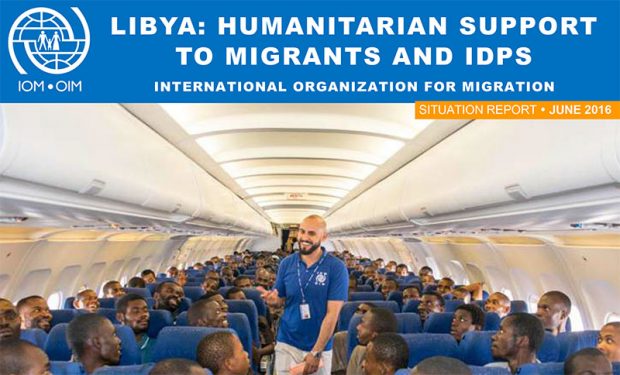 As the Libyan crisis continues, June continues to see unrest in many parts of Libya as a result of the strained living conditions due to, among other reasons, the on-going liquidity and electricity crisis. The economic situation is deteriorating with the Libyan Dinar’s value decreasing, as Libyans continue to line up outside banks in desperate attempts to withdraw money. The influx of both Britain and Russia printed cash is on going, which has been a reason of concern regarding the country’s unity.

In addition, clashes and military operations against the Islamic State continues around the group’s strong hold Sirte, causing large number of displaced people. The displacement is stretching the already strained capacity of local communities such as Tarhuna, Al Jufrah and Bani Waled. The country’s humanitarian crisis is also affecting the migrants and IDPs with for example the hospital in Bani Waled warning that it may be forced to shut down due to shortage of medical supplies. A similar situation has been witnessed in Benghazi, where a grenade attack on 23 June severely damaged the reception area of Jalaa Hospital and only one day later a car exploded outside the same hospital.

The warm weather has contributed to the continuing high number of maritime incidents off the Libyan coast. In June, the Libyan Coast Guard (LCG) rescued 2,531 migrants off the Libyan shore, many of which were transferred to Abu Saleem and Abu Eissa detention centres. The detention centres, particularly Az Zawiyah’s Abu Eissa and Shuhada’ Al Nasr remain severely over capacity and have requested health care support, for which IOM Libya has provided assistance. As of 28 June, the LCG had rescued 8,648 migrants and registered 160 fatalities for 2016. June has not only seen a number of rescue operations by the Libyan Coast Guard, but also the Italian coastguard and navy, which rescued 3,300 migrants off the coast of Libya in a series of operations in the end of the month, the migrants were taken to southern Italian ports.

[su_note note_color=”#fefccb”]162 Nigerian migrants, including 28 women and 3 children, were repatriated to Nigeria. Of the group, 146 had spent months in detention centres in Abu Saleem, Qarapoly and Az Zawiyah.[/su_note]

[su_note note_color=”#fefccb”]On 10 June, The Netherlands and IOM Libya signed an agreement for an 18-month project aimed at enhancing the Libyan Coast Guard’s capacity to save lives at sea and supporting humanitarian repatriation of vulnerable migrants from Libya.[/su_note]

[su_note note_color=”#fefccb”]The Libyan Coast Guard has rescued a total of 2,531 migrants outside the Libyan coast during June. IOM Libya is working to meet the needs of these migrants.[/su_note]

For: IOM issues report on migrants situation in Libya during June