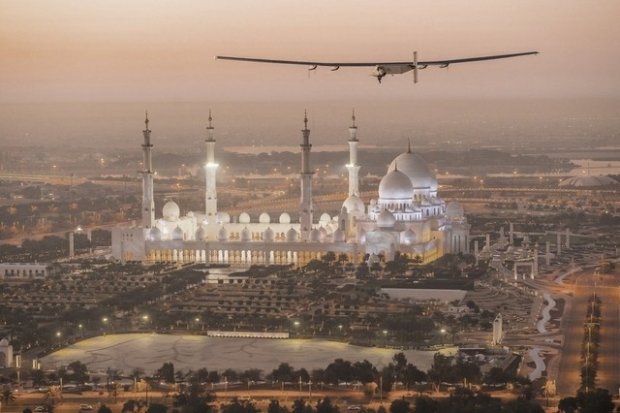 The first round-the-world solar powered flight has been completed, after the Solar Impulse aircraft touched down in Abu Dhabi.

Bertrand Piccard piloted the plane for a final time, steering it safely from the Egyptian capital Cairo to the UAE.

He has been taking turns at the controls with Swiss compatriot Andre Borschberg, with the mission aiming to promote renewable energy. It brings to an end a voyage that began in Abu Dhabi on 9 March last year.

“The future is clean. The future is you. The future is now. Let’s take it further,” Mr Piccard said, arriving into Abu Dhabi to cheers and applause. The 17-stage journey covered some 42,000km, taking in four continents, three seas and two oceans.

The longest leg, an 8,924km (5,545-mile) flight from Nagoya in Japan to Hawaii, US, lasted nearly 118 hours and saw Mr Borschberg break the absolute world record for longest (time duration) uninterrupted solo flight. It was just one of 19 official aviation records set during the global adventure.

Mr Piccard and Mr Borschberg have been working on the Solar Impulse project for more than a decade.

The pair had hoped to complete the challenge last year but progress was not quite swift enough to get the best of the weather in the Northern Hemisphere’s summer. And when battery damage was sustained on that epic five-day, five-night passage over the western Pacific in June/July 2015, the decision was taken to ground the effort for 10 months.

For: Solar Impulse 2 touches down in Abu Dhabi after round-world flight