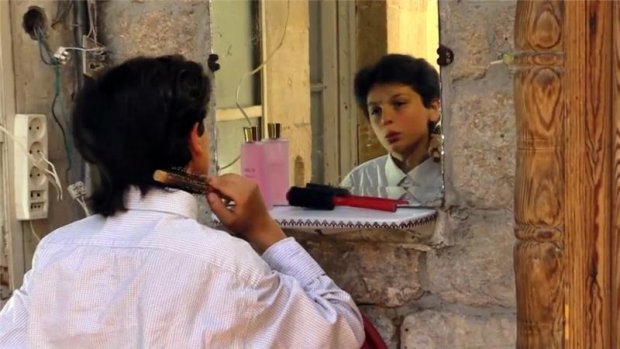 He was a child TV star in an unlikely location, sending up the trials of everyday life in besieged, war-torn Aleppo. The same Syrian war has now claimed 14-year-old Qusai Abtini’s life.

It has emerged that he died last month when a missile struck the car he was travelling in as he tried to flee the city.
Qusai played Abu Abdou, the husband of the title character in Umm Abdou the Aleppan.

The show, in which all characters were played by children, aired in 2014 on the opposition channel Halab Today TV. It was the first sitcom to be produced in a rebel-held part of Syria, and was filmed entirely inside Aleppo.

The programme has been likened to the US show I Love Lucy. It showed residents dealing with power cuts, bombardments and romantic relationships in a city divided by factionalism and war.

There were nearly 30 episodes, each about 10 minutes long
Qusai’s character Abu Abdou, who first appeared in this episode, was a domineering and patriarchal husband to his clever, ambitious but ditzy wife, played by a girl called Rasha

In one episode, Umm Abdou demands a high dowry to stop an Islamist militant fighter from marrying her daughter – because she would prefer a husband from the secular Free Syrian Army

In another, she and her friends decide to form a women-only rebel faction, but Abu Abdou teases her that it is unrealistic because of her fear of mice and cockroaches

In one outtake, three child actors jump at the sound of a real explosion nearby, then carry on with their lines. Qusai’s on-screen wife was played by a girl called Rasha.

During recent bombing, Qusai’s home was hit and his father was wounded and physically disabled, prompting a decision to send his children out of the city.

On 8 July, the car they were in was hit by a missile.
Media reports have offered conflicting accounts of what happened.

A London-based newspaper, Al-Arabi al-Jadid, said Qusai and his father had been hit by a missile fired from a Russian warplane. A Turkey-based newspaper, Inab Baladi, suggested they may have died in shelling by Syrian government forces.

The sitcom’s director Bashar Sakka told the Associated Press news agency: “Qusai was a very talented boy. “We were looking for an intelligent boy. We wanted him to be free with ideas, and without fear of Bashar Assad’s regime and its ruthlessness.”

Days after Qusai’s death, several dozen people reportedly marched through the area he came from, chanting: “Qusai has gone to heaven. Bashar is the killer of my people.”

Qusai, who was 10 when protests against President Assad began in 2011, took part in demonstrations and opposition videos before becoming an actor. Aleppo was once Syria’s commercial capital and also boasted a rich architectural and archaeological heritage. Much of this has been destroyed or looted during more than five years of war.

Russia and Syria announced the opening of what they called humanitarian corridors for civilians and rebels wanting to surrender, but few people are reported to have used them, fearing they would be targeted.