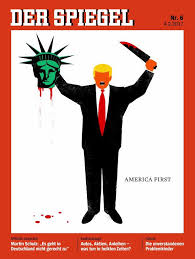 Some German newspapers criticised the cartoon, while the German vice-president of the European Parliament called it “tasteless”.

The cartoonist, Edel Rodriguez, said the image represented “the beheading of democracy”.

US-German relations have deteriorated under President Trump, who has criticised the policies of German Chancellor Angela Merkel.

He said last month that her policy of welcoming masses of migrants who arrived in Germany had been a “catastrophic mistake”. His trade adviser also recently attacked Germany for gaining unfair trade advantages from a “grossly undervalued” euro.

The front cover image is similar to one that appeared on the front page of the New York Daily News in December 2015, also showing Mr Trump beheading the Statue of Liberty but in a less gory fashion.