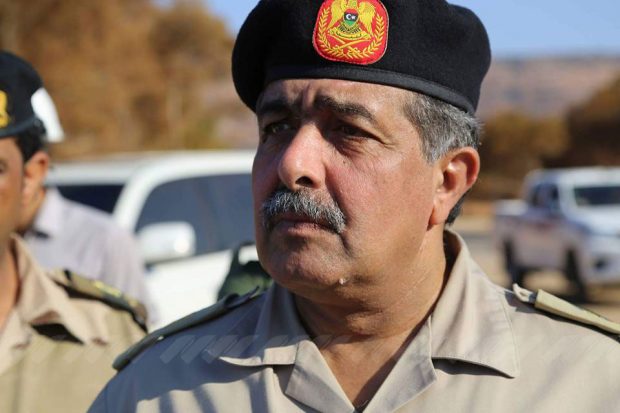 The Chief of Staff of the Tobruk-based House of Representatives and Dignity Operation forces of Khalifa Haftar, Abdelraziq Al-Nathory, has said the Egyptian Army is protecting the entire eastern borders of Libya positioning itself as far as some 40 km into the Libyan soil.

In a press statement to the Al-Masry Al-Youm newspaper, Al-Nathory added that the western borders are “like the Tunisian President Beji Caid Essebsi said; under the reign of the fait accompli government.”

“Regarding to the Libyans’ concern about existence of foreign or unknown warplanes hovering above the cities. I can say, in Sirte there are American warplanes, but in Benghazi there is none, neither Egyptian nor Emirati, as people mix between artillery sounds and those of the aircraft. We only asked Egyptian air force once to target Derna, and that was successful collaboration.” Al-Nathory added.

Al-Nathory also said that him being appointed as the military governor of the east is not aimed at militarizing the region or a coup on the law, but the idea came after the civil mayors and ministers were proven inadequate in responding to the people’s needs and exacting the laws in the cities and the districts of the east.

“We are trying to exact the laws and present the full power of the army and the government in the same manner that the Egyptian army did in June 30, 2013, we are doing nearly the same but with less force as we haven’t got a full-formed army to put a grip on the entire country.” Al-Nathory concluded.