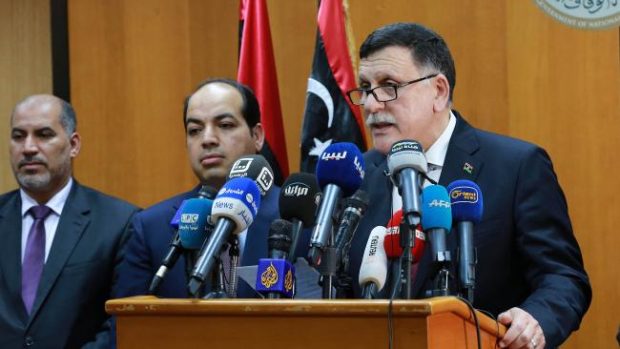 Libya’s intelligence service said it has foiled a Daesh plot to assassinate Prime Minister of the unity government, Fayez al-Sarraj, in the capital Tripoli.

“The intelligence service has recently arrested the head of a Daesh cell who was planning an operation in the government headquarters when al-Sarraj is inside,” the intelligence chief, Mustafa Noah, told Anadolu Agency on Friday.

He identified the detained Daesh operative as Abu Moaz al-Ansari, a Libyan national.

“He was assigned with carrying out the operation, but the intelligence service managed to abort it,” he said, without elaborating.

Earlier in a similar incident and according to unconfirmed Libyan sources, the Zintani forces allied with Dignity Operation, led by Khalifa Haftar, arrested Abu Nassim Fezzani, who was proclaimed Tunisia’s most wanted terrorist in February, and some 20 other IS militants between the Libyan towns of Rigdaleen and Al-Jemail, while they were trying to get to Tunisia several days ago.

The Tunisian authorities want Moez Ben Abdulgader Ben Ahmed Fezzani as they say he is responsible for the IS raid in March in the city of Ben Guerdane in Tunisia on the border with Libya, which left 58 people dead, not to mention that he is also considered a jihadist recruiter in Italy.

The Italian newspaper “Corriere della Sera” revealed on Tuesday that the intelligence bodies of the Government of National Accord (GNA), during a raid on a stronghold of ISIS in Sirte area – Ouagadougou Conference Halls Complex – found documents containing names of their fighters in the Italian city of Milan. In addition to terrorist plans to target the country, and Information on the role of IS leaders, saying that they are probably associates of Abu Nassim, 47, who lived in Italy in his 20s and later fought in Afghanistan and Syria then became an IS commander in Libya, the report said.

For: Libya’s Intelligence said it foiled IS attempt to assassinate Al-Serraj