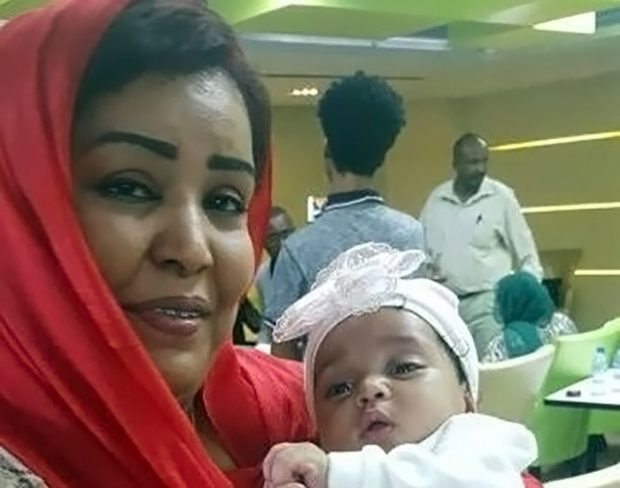 Father of a deceased Islamic State (ISIS) sympathizer on Monday has revealed that the twin sisters who flew from Khartoum to join the ranks of the group in Syria have been detained in Libya, according to Sudanese Tribune.

A Sudanese baby repatriated to Sudan after the death of his parents in Libya on Monday 6 February 2017 (ST Photo)
In 2015, two batches including twenty nine students from the medicine and pharmacy departments at the University of Medical Sciences and Technology, several of them holding British passports, travelled to Syria to join the Islamic State (ISIS) in Syria.

The two batches were followed by a third group of four girls, including twins Manar and Abrar Abdelsalam, the Sudanese paper added on Tuesday.

Al-laithi Youssef, father of Aya Youssef who joined ISIS in December 2015 and was killed alongside her husband, Ahmed Gasm al-Sid has arrived in Khartoum on Monday accompanied y his baby granddaughter, reported Sudanese Tribune.

According to Al-laithi, Sudan’s National Intelligence and Security Services (NISS) in coordination with the Red Crescent have orchestrated a complex operation to hand over the baby in Libya, saying they conducted the necessary tests to establish her descent as well as her health and safety.

It is noteworthy that Aya had delivered a baby daughter before she was killed.

The Sudanese newspaper added that Al-laithi, who spoke to reporters upon arrival at Khartoum airport, disclosed that he met with the twin sisters Manar and Abrar Abdelsalam in the Libyan town of Musrata, saying they are being interrogated by the security authorities.

He pointed the twins have told him the story of his daughter’s death and when and how she delivered her baby, expressing confidence that the NISS would bring the twins back to their family safe and sound.

The grieving father has described his deceased daughter as “pious and genius”, praising NISS’s efforts to bring back his daughter and the rest of the youths who joined ISIS.

“It is obvious that the NISS enjoys wide relations abroad and it employs these relations to secure and protect the Sudanese boys and girls and to bring back those who fled the country,” he said.

In 2015, the Ministry of Interior in Khartoum announced that about 70 Sudanese had gone to join the ISIS franchises, both in Libya and Syria, according to Sudanese Tribune. They say that 35 of them have been killed in Iraq and Syria while 20 others have died in Libya.

For: Sudanese twin sisters detained in Libya for links to IS, father tells Sudanese press