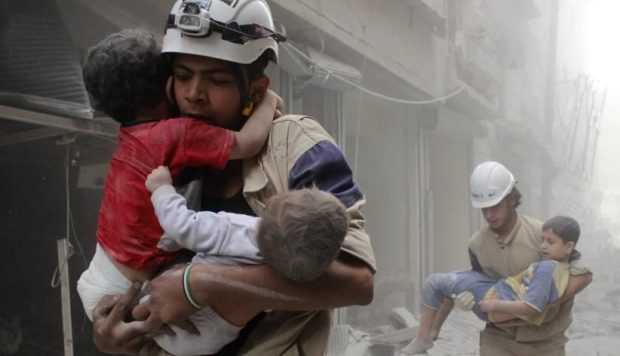 Los Angeles Times – Netflix’s “The White Helmets,” about a group of first responders in Syria, is a film pulsing with meaning, said director Orlando von Einsiedel backstage after snagging the Oscar for best documentary short.

“Right from the start this was about shining a very bright light on the heroes of our film, the white helmets, Syrian rescue workers,” said Von Einsiedel, who previously won best documentary for 2014’s “ Virunga .” “We [hope to] continue to magnify their voices.”

On the film’s cinematographer, Khaled Khateeb, who was denied entry into the U.S. due to “derogatory information” and therefore couldn’t attend the Oscars, producer Joanna Natasegara said they had just spoken to Khateeb.

“It’s been ameliorated because of the win. He’s thrilled because he, like us, wants the world to know about the white helmets,” she said.

On President Trump’s travel ban, in general, she added: “We as filmmakers travel across the world and we don’t believe in building anything but compassion between people, and we’d never support something like the ban.”

When asked why the leader of the white helmets wasn’t in attendance, Von Einsiedel said:

“He couldn’t come in the end because the violence in Syria has escalated,” he said. “He does life-saving work, and he decided his time was better [spent] by staying there.”

The views expressed in Op-Ed pieces are those of the author and do not purport to reflect the opinions or views of Libyan Express.
How to submit an Op-Ed: Libyan Express accepts opinion articles on a wide range of topics. Submissions may be sent to oped@libyanexpress.com. Please include ‘Op-Ed’ in the subject line.
OscarSyriaWhite Helmets
Share
Submit a Correction
Sign up for our Newsletter.