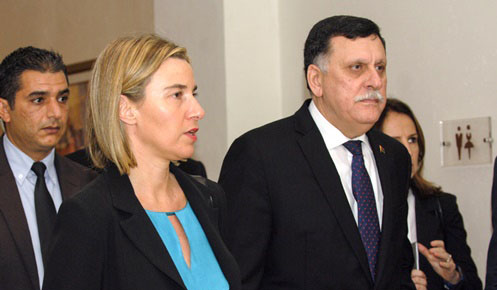 The Foreign Ministers of the European Union urged, from a meeting in Brussels Monday, the Tobruk parliament members to vote for the new accord government cabinet presented by the Presidential Council.

The EU explained that the news of the new formation is “very good” and must be proved by Tobruk parliament in order to bring back peace and stability in Libya.

“I hope the new cabinet gets approved and all Libyans assume their responsibilities.” Said the High Representative of the European Union for Foreign Affairs and Security Policy, Federica Mogherini.

Likewise, the Arab League’s Secretary General, Nabil Elaraby, welcomed the new formation by the PC, calling on Tobruk parliament to approve it so that it can start operating its tasks from Tripoli as included in Skhirat agreement, which was signed in December 2015.

“We urge all the Libyan political parties to cooperate with the newly formed government and to not waste the opportunity to bring the stability and security back to the country.” Elaraby added.

For: The European Union, Arab League hail Accord Government formation, call for approval