US navy warships to join EU, NATO vessels off Libyan coast by Summer 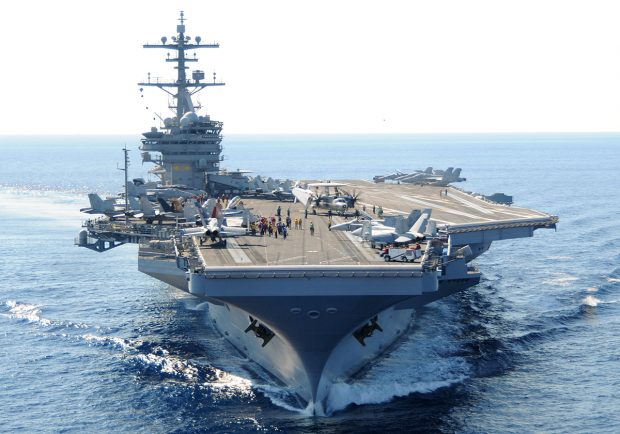 US warships could join European Union vessels off the coast of Libya by the coming of summer in a NATO-led attempt to slow the flow of refugees from Africa into Europe, it emerged at a meeting of the G5 world leaders in Hanover.

Until today, the EU has been entirely responsible for patrolling the international waters off Libya , through Operation Sophia, and NATO has been patrolling the much narrower Aegean Sea between Turkey and Greece.

The Guardian reported that officials at the G5 meeting said it was now being proposed that the EU and Nato work together off Libya sharing intelligence and assets to close down the smugglers’ networks. EU leaders, especially Italian ministers, are deeply concerned by a potential surge in the number of refugees reaching Europe from Africa, even though there has not yet been a spike in the figures this year.

It is likely that a wider EU mission will be approved by alliance leaders at a Warsaw summit on 7 July, according to the Italian defence minister, Roberta Pinotti.

“At the Nato level, we have asked for Operation Active Endeavour to be recalibrated from an anti-terrorist operation in the eastern Mediterranean to one which oversees the Libyan coast,” said Pinotti, according to the Guardian.

Asked if she expected a green light at the Warsaw summit, Pinotti said: “Yes, certainly for the coordination of missions in the Mediterranean. At this summit, the proposal should become an effective decision.”

In a statement after the meeting, Downing Street said David Cameron “made the case for seeking to work with the new Libyan government to build the capacity of the Libyan coastguard to help stem the flow of illegal migration across the Mediterranean into Europe”.

For: US navy warships to join EU, NATO vessels off Libyan coast by Summer