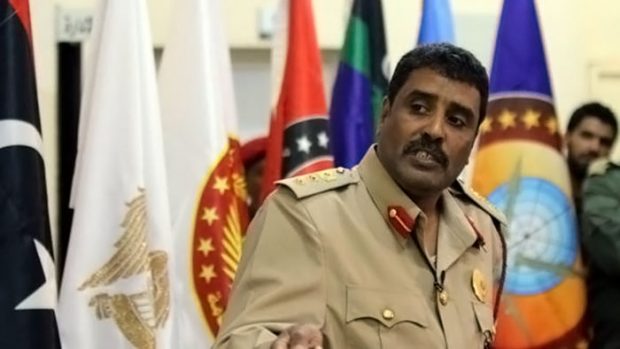 The spokesman of Dignity Operation, Ahmed Al-Mismari, stated that the attempts of western and southern affiliate leaderships under the command of Khalifa Haftar’s sidekicks Omar Tantoush and Ali Kanna respectively to create parallel army commands have gone awry.

“Tantoush in the west and Kanna in the south are part of the project of the former regime’s henchmen, who are wishing to take part of the leadership and command of the Libyan armed forces led by Kahlifa Haftar and then split the command into three parts – western, eastern and southern.” Al-Mismari disclosed in press statements.

Al-Mismari added that Tantoush’s rejection of Haftar’s decision to dismiss him from the leadership of Dignity Operation, which is backed by the Tobruk-based House of Representatives, was actually disowned by Tantoush’s own city brigades in Wershefana.

“Brigade 26 and Brigade 4 infantry refused the rejection of Tantoush regarding his beign dismissed by Khalifa Haftar from his position as leader of pro-Dignity Operation forces in Wershefana.” Added Al-Mismari.

“Wershefana brigades, elders and notables called us in the east and called Khalifa Haftar saying they totally back our decisions and that they are in support of the command of Khalifa Haftar.” Al-Mismari indicated in his statement.

Earlier last week, Khalifa Haftar issued a statement saying that he dismissed Omar Tantoush from his position as the commander of the Wershefana brigades, which are under Dignity Operation forces in the east and call themselves “Libyan Army forces”.

On Thursday, however; Ali Kanna, who us in charge of Dignity Operation-led forces in the south, held a meeting in Qeerah, Al-Shatea, with more than 25 officials aiming at ousting Khalifa Haftar’s reign on them and becoming autonomous, yet the meeting was dismissed as the commander of brigade 12 of Dignity Operation, Muhammed Ben Nayel, ringed the meeting place and forced them out.

“The forces of Ben Nayel tried to push us out of the meeting, we clshed with before the elders of the district had interfered and ended the fight.” Kanna’s right-hand military man, Abdelsalam Laila told Ajwaa Net.

In a bid to end this race for power in the southern region, the military officials in the south named Sulaiman Kanna Al-Targi as the commander of Dignity Operation affiliate forces in the south after the meeting ended in Qeerah Al-Shatea district.

Ali Kanna told Ajwaa Net on Thursday that he takes a neutral stand regarding the military leaderships of pro-HoR military forces and the forces in the west, which was rendered by Khalifa Haftar’s Dignity Operation spokesman, Al-Mismari as an attempt by Kanna to form new autonomous and parallel military leadership in the south.