Ben Carson: Donald Trump promised me a position and so I endorsed him 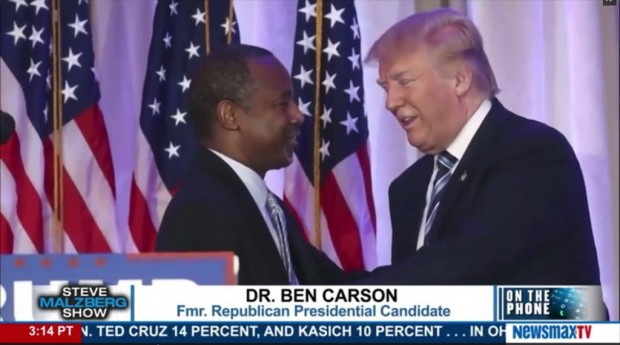 Dr. Ben Carson, who endorsed Donald Trump’s presidential candidacy on Friday, appears less than enthusiastic about that decision. And the real reason the unsuccessful GOP presidential hopeful endorsed his former rival could be a violation of federal law.

Carson told the conservative online site NewsMax TV on Monday that he backed Trump based on a practical calculus.

“I didn’t see a path for [John] Kasich, who I like, or for [Marco] Rubio, who I like. As far as [Ted] Cruz is concerned, I don’t think he’s gonna be able to draw independents and Democrats unless has has some kind of miraculous change… Is there another scenario that I would have preferred? Yes. But that scenario isn’t available.” Pressed to clarify, Carson said he meant he’d prefer to have backed one of the other candidates.

Carson then said that Trump had promised him a role in his administration, “certainly in an advisory capacity.” Asked by NewsMax’s Steve Malzberg whether this meant a cabinet position, Carson declined to “reveal any details about it right now, because all of this is still very liquid.”

Federal law expressly prohibits candidates from directly or indirectly promising “the appointment of any person to any public or private position or employment, for the purpose of procuring support in his candidacy.” The penalty for violations could include fines or a year in jail — two years if the violation was willful.

The Trump campaign did not immediately respond to a ThinkProgress inquiry about whether such an illegal offer was made to Carson. Prior to Carson’s departure from the race, Trump suggested that Carson might be “pathological,” like a “child molester.”

For: Ben Carson: Donald Trump promised me a position and so I endorsed him