Egypt shuts down arts venues ahead of uprising’s anniversary 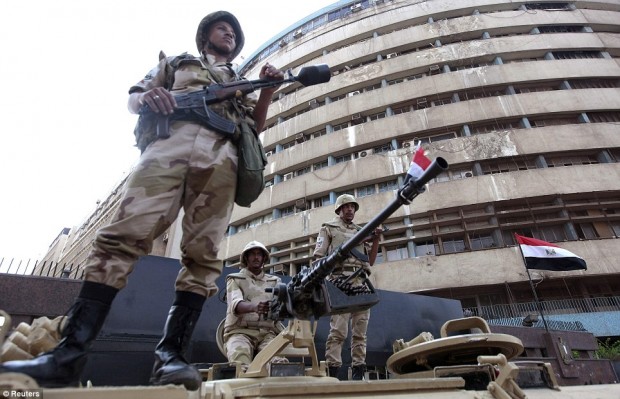 Over the past two days, the Egyptian authorities have shut down an internationally respected art gallery and raided an independent publishing house in what free-speech advocates said Tuesday were the latest moves in an expanding crackdown on dissent that now includes cultural spaces popular with activists and artists. In the first raid, on Monday, government agents seized papers and computers at the Townhouse Gallery and the affiliated Rawabet Theater before suspending the organization’s activities, according to Fatima Serag, the legal director for the Association of Free Thought and Newsion, a group that monitors free speech in Egypt.

On Tuesday, officials and police officers raided Merit, the publishing house, arresting an employee and confiscating equipment, said Mohamed Hashem, the founder, who wrote about the episode on Facebook.

The episodes were the most recent enforcement actions directed against cultural institutions. Human rights advocates said the institutions may have been seen as threatening by the government of President Abdel Fattah el-Sisi, which has been suspicious of any group that might receive foreign funding as well as any gathering spaces for the government’s opponents.

In recent weeks, Mr. Sisi’s government has spoken nervously about the possibility of protests on the fifth anniversary of the 2011 uprising against former President Hosni Mubarak. The government banned unauthorized protests more than two years ago, and Mr. Sisi recently referred to calls for demonstrations on the anniversary as an effort to “destroy” the country.

Ms. Serag and others said the raids on the cultural institutions were directly related to the government’s fear of unrest: among other possible motives, both Merit and Townhouse are in downtown Cairo, near Tahrir Square, the center of the 2011 protests. Both facilities are also among a dwindling number of venues for performances, films and talks, and are magnets for politically active young people.

“They are scared of Jan. 25,” Ms. Serag said, referring to the date considered to be the beginning of the 2011 uprising. Ayman Helmy, an Interior Ministry spokesman, declined to comment on the raids.

The closing of the Townhouse Gallery, a pioneering contemporary art space established in 1998, was seen by curators, artists and free-speech advocates as an especially worrying loss. The gallery, which included a library and the theater, was an anchor of the downtown cultural scene and a proving ground for artists who have gone on to international acclaim. Writing about the closing on Twitter, Shiva Balaghi, a curator focused on the Middle East and a visiting scholar at Brown University, called it a “critically important space.”

“Many of the Middle Eastern artists that you see at the Tate, Guggenheim, Met, Brit Museum, Frieze, Art Basel were first shown at #Townhouse,” she wrote.

For: Egypt shuts down arts venues ahead of uprising’s anniversary