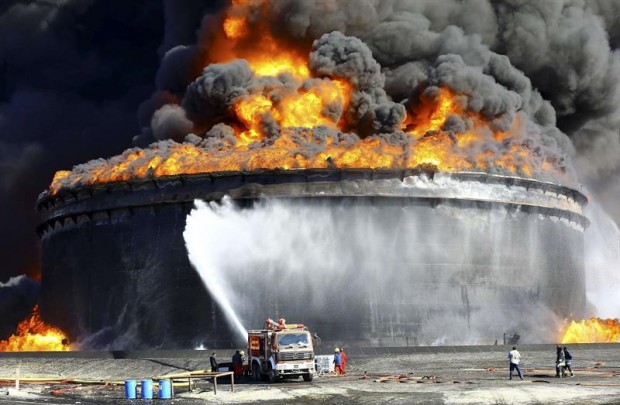 The spokesperson of the National Oil Cooperation, Mohammed Al-Harrari told Press Solidarity news Sunday that the fire set to the oil tanks of Houroge company has been completely extinguished.

Moreover, the spokesperson of the Oil Facilities Guard, Ali Al-Hassi also briefed Press Solidarity news that the security situation on the ground within the oil crescent region is totally under control.

“Fire fighters from the oil companies managed to put out the fire that was burning in a number of the oil tanks of Houroge oil company, which was caused by the IS attack on the oil facility a couple of days ago, therefore, the oil companies’ fire fighters extinguished the fire alone without help from any external entities.” Reaffirmed Al-Hassi.

In relation, the Head of the NOC, Mustafa Sanallah confirmed in a press conference Thursday that oil tanks number 10, 12, 8, and 5 were burning in Ras Lanuf oil port, underscoring that expected loss would be around 3 million oil barrels.

For: Fire in main oil tanks in key Ras Lanuf port put out and contained