Three boats carrying the first migrants to be deported from Greece to Turkeyunder an EU deal with Ankara have made the short journey across the Aegean Sea to the Turkish port of Dikili.

Two boats carrying 131 deportees arrived from Lesbos. A third, carrying 66 people, came from the nearby island of Chios.

Under the deal with the EU, Ankara is supposed take back all migrants and refugees who enter Greece illegally, including Syrians, in return for the EU taking in thousands of Syrian refugees directly from Turkey and rewarding it with more money, early visa-free travel and progress in its EU membership negotiations.

Officials from the EU border agency Frontex said the Lesbos boats were carrying mostly Pakistanis who were already being deported to Turkey before the deal’s creation. As such Monday’s deportations are not a true test of whether the agreement can stop the flow of mainly Syrians, Afghans and Iraqis to Greece.

The first boat to arrive under the EU-Turkey deal is arriving now in Dikili pic.twitter.com/MIuAHrg3cX

EU authorities said none of those deported on Monday had requested asylum in Greece and all had left voluntarily. The Greek civil protection ministry said there were two Syrians on board one of the boats from Lesbos, both of whom had asked to be sent back.

The deportations on Lebsos were calmly carried out at dawn, several hours ahead of schedule. Many deportees carried backpacks. None waved to the few photographers gathered on the quay.

Volunteers on Chios alleged that they saw police beating deportees at the quay.

The first boat to moor in Dikili was a chartered Turkish catamaran, the Nazli Jale. Frontex officials inside the boat wore masks. Disembarkation was delayed while officials erected a white tarpaulin on the boat to block the media’s view.

Migrants deported to Turkey will be sent to the area in which they first registered their arrival, or if they did not register, to a detention camp in the north-west of the country.

Several registration tents have been erected on the quay at Dikili, where there is a heavy police presence.

Officials took down a huge banner next to the quay that said the citizens of Dikili opposed the refugees’ arrival . Local opponents of the deal claim 4,000 people have signed a petition of complaint. 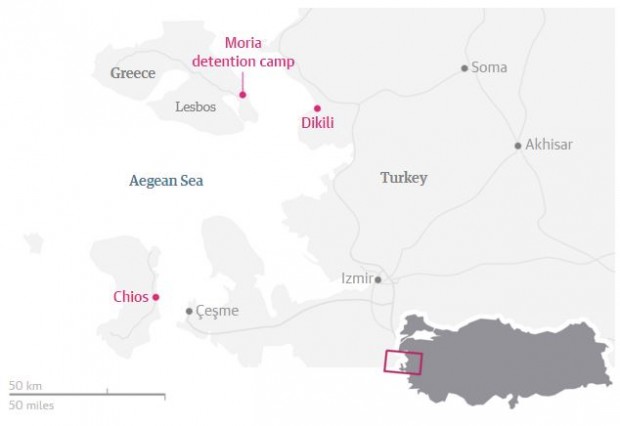 “Dikili is very small – just 40,000 citizens,” said Emirhan Çekun, as he asked passersby to sign the petition. “We cannot fit the refugees.”

Elsewhere on the Turkish coast, people were photographed being arrested by coastguards as they attempted to reach Greece, suggesting that some remain undeterred by the deportations.

Greek authorities took many by surprise deploying buses to pick up the deportees from the Moria detention camp on Lesbos at the crack of dawn. While Monday’s operation appeared to have gone smoothly, it remained far from certain when more would be expelled from the island.

“I hate to say this but they were easy cases,” said Eva Moncure, a Frontex spokeswoman. “I really cannot tell you when the next readmission will happen.”

The vast majority of the 2,800 detainees in Moria have applied for asylum, which will inevitably delay the process as their requests are examined and heard. Most are Syrians, Iraqis and Afghans.

“What we know is that 90% of [those in] the Moria camps have applied for asylum,” said Lieutenant Zacharia Tsirigoti, who runs the Greek department for refugees.

Protesters – many volunteers who have been on the island for months – held placards deploring what they described as a “dirty deal”. “EU shame on you! No borders, no nations, stop the dirty deportations,” they chanted on the harbour side.

“This is an appalling deal. What we are hearing from authorities is that no one [on the boats] wanted to apply for asylum but the question is how do we know?” said Steffi De Pous, a Dutch volunteer on the island. “These people risked their lives to get here. Were they given the right information? Did they know their rights?”

Volunteers, she said, had decided to go to Moria with megaphones to “let them know what their rights are so that they are not bullied into this process”.

In Dikili, alongside residents opposing the presence of refugees, several refugee campaigners arrived to express their support for those being deported. Some carried a banner that said: “Stop deportations, open the borders.”

Baran Doğan, a refugee rights campaigner from Izmir, the regional capital, said: “This is the bargaining and bartering of human bodies – it’s treating humans as goods.”

He added that Turkey should not be considered a safe country for refugees since there is a war in the south-east of the country, frequent bomb attacks elsewhere and no labour rights for Syrians. “In reality there are no legal jobs for them,” said Doğan.

Another campaigner, Idil Gökber, from Refugee Volunteers of Izmir, said Europeneeded to help Turkey with its refugee burden. “I welcome the refugees,” said Gökber. “But 3-4% of the Turkish population are Syrian refugees so we have to share them [with Europe]. If only Turkey takes these refugees, it’ll be bad for them, and also for us.”

The EU-Turkey deal was struck in March as Europe wrestled with the continent’s worst migration crisis since the second world war, with more than 1 million people arriving last year.

Under the agreement, designed to halt new arrivals along the most popular route through Turkey, all “irregular migrants” arriving since 20 March face being sent back. Each case is meant to be examined individually. For every Syrian refugee returned, another Syrian refugee will be resettled from Turkey to the EU, with numbers capped at 72,000.

Total transparency on this EU-Turkey deal. Turks now putting up blue tarp to stop the prying eyes of the press pic.twitter.com/KSYm5zDOSq

The first Syrians to be resettled in Europe under the exchange deal arrived in Germany on Monday morning. Two planes each carrying 16 Syrian refugees touched down from Istanbul in the northern city of Hanover, according to Germany’s federal refugee office. The refugees were taken by bus to a reception camp about 90 miles away in Friedland near Göttingen.

More than 52,000 men, women and children are now stranded in Greece following the decisions of Balkan countries to close their borders. Police sources on Lesbos on Sunday said there had been a flurry of last-minute asylum applications among the 3,300 migrants there.

Many people have complained of not being given sufficient time and access to the asylum procedure, which is under “insufferable pressure” according to senior asylum officials in Athens.

Screening people, processing requests and hearing appeals in as little as two weeks, leaves the door wide open to error. Last week, Greece’s top asylum official admitted the bankrupt country would require a 20-fold increase in personnel to cope with the extra burden.

Promised staff reinforcements in the form of about 2,300 legal experts, asylum practitioners and translators from the EU have yet to arrive.

Anas al-Bakhr, a Syrian engineer from Homs who is among those stuck on Chios, said police marked his arrival date as 20 March – when the deal came into force – even though he arrived the day before.

“They said the computers were broken that day,” he said.

For: First refugees boats arrive in Turkey on forced leave from Greece