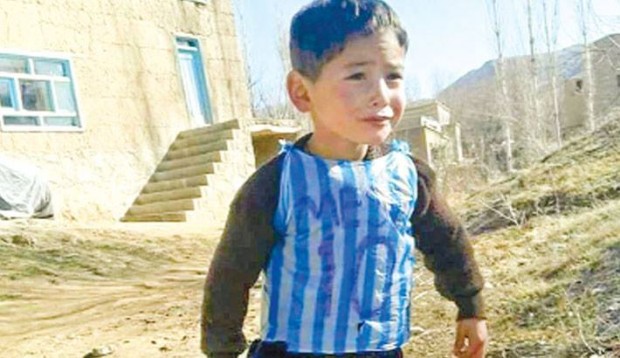 A 5-year-old Afghan boy who made a splash on the Internet by wearing a homemade Lionel Messi jersey might get the chance to meet the Barcelona great.

The Afghan Football Federation said it is planning to set up a meeting between Messi and Murtaza Ahmadi, who was pictured wearing an Argentina jersey made from a plastic bag with Messi’s name and number on the back.

Afghan federation spokesman Sayed Ali Kazemi said Tuesday officials hope Messi can come to Afghanistan to visit the boy, but otherwise they will arrange to send him to Spain, where Messi plays with Barcelona, or arrange a meeting in a third country.

Pictures of Murtaza playing soccer near his home in eastern Ghazni province showed him wearing the plastic bag — in blue and white stripes like the Argentina national team shirt — with Messi and 10 written in black marker.

Murtaza is reportedly the son of a poor family living in remote Joghori district.

Arif Ahmadi, Murtaza’s father, said he and his family have only solar power and the boy has seen Messi on TV.

“He (Murtaza) asked me many times to buy a Messi shirt,” Arif Ahmadi said. “I couldn’t provide for him. Later, his brother made him this plastic shirt and posted his photo on Facebook.”

Messi has met with children in special circumstances in the past. In 2011, he met and kicked around a ball with a 10-year-old boy who had had both legs amputated because of Laurin-Sandrow syndrome. He did the same a year later with a Brazilian boy who was born without feet.

Murtaza was in Kabul on Tuesday, wearing some Barcelona gear under his homemade shirt while running through some soccer drills at the national stadium.

“The Spanish embassy is ready to issue visas for them,” said Keramuddin Karim, the president of the Afghanistan Football Federation. “We are trying to make contact directly with Barcelona to arrange the meeting, where, when and which date.”