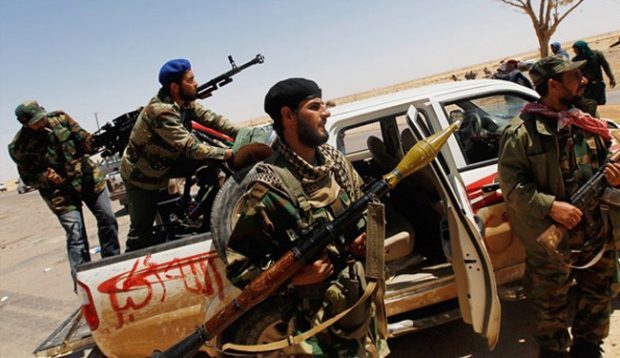 Sources from the Benghazi Shura Council reported Tuesday that four fighters from Dignity Operation forces of Khalifa Haftar were killed and others were wounded by a landmine blast in Gawarcha frontline in the war-torn city.

The sources, which asked to remain unidentified, also said that there were foreign drones hovering above the Chinese Buildings neighbourhood in western Benghazi.

“Benghazi Shura Council’s fighters are still positioned in their locations in the Chinese Buildings despite such foreign intervention and support given to Hafatr and his Dignity Operation forces.” Added the sources.

On August 30, media sources reported that clashes between Dignity Operation forces and Benghazi Shura Council renewed on the western frontline.

The sources indicated that five fighters from Dignity Operation were killed and others were injured in the fierce clashes that broke out early that day.

While on August 29, Benghazi Shura Council announced the capture of Al-Yasameen Summer Resort, according to the media arm of the council, Saraya Center.

For: Four Dignity Operation fighters killed by a landmine in Gawarcha, Benghazi