Free sugar app to check products, parents should have it

Parents are being urged to sign up for a free app which tells them the sugar content of food and drink.

The “sugar smart app”, from Public Health England, works by scanning barcodes and revealing total sugar in cubes or grams.

Its new Change4Life advertising campaign, which includes the sugar app, suggests that on average children aged four to ten years old are consuming 22kg of added sugar a year.

That’s about 5,500 sugar cubes – more than the weight of an average five-year-old child.

The app has been developed to raise awareness of how much sugar is contained in everyday food and drink.

It works on more than 75,000 products, offering a quick guide to help parents to assess potential purchases that may harm their children’s health.

Will you use it? Your reaction

Dr Alison Tedstone, chief nutritionist from Public Health England, said children were having too much sugar in their diets and this was leading to painful tooth decay, weight gain and the potential for serious health problems in later life.

Overweight and obese adults are more at risk of heart disease, type 2 diabetes and some cancers.

“If there’s one thing I’d strongly encourage parents to do, and that’s to swap sugary drinks out of their kids’ diets for either a low-sugar drink or water or low-fat milk, which would be a really excellent choice.”

She also said people might be surprised to discover the sugar contents, for example, of some yogurts and fruit drinks. 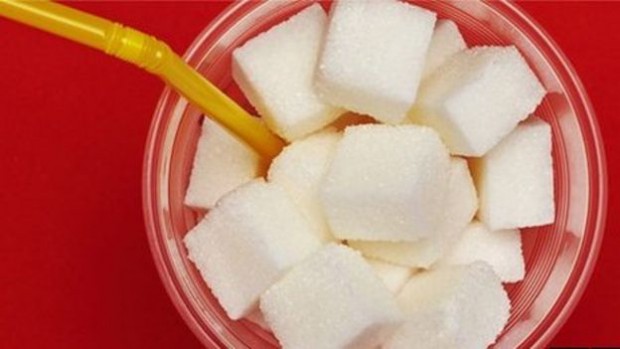 How much sugar is hiding in your food?

PHE has previously said it supported a sugar tax to help people cut down on the sugar they eat.

It has also called for reduced marketing of sugary food and drinks towards children in stores, on TV and online as well as fewer price promotions on sugar-laden products.

The sugar smart app is free to download from app stores.

For: Free sugar app to check products, parents should have it