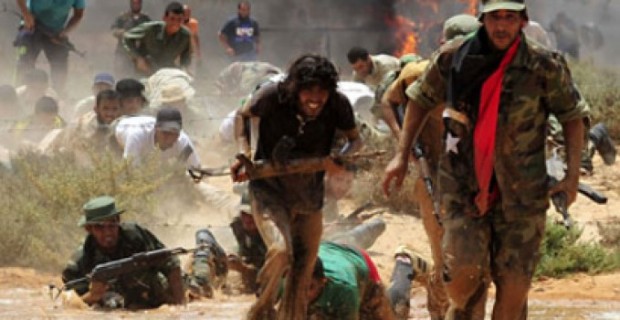 The Operation Dignity leader Khalifa Haftar has been delivered a big blow as one of his forces’ senior leaders, Captain Adel Al-Dersi, announced his defection on air on Monday.

Speaking to a local TV channel, Al-Nabaa, Al-Dersi defected from what he called the Libyan National Army, and the Operation Dignity, which he said has become a puppet in the hands of Haftar and his sons.

Al-Dersi attributed his defection to the act done by Haftar’s forces, who stormed the farm of the former leader in Operation dignity, Faraj Al-Barasi, trying to kidnap him and after that stormed into the houses of civilians in Al-Bayda in search for him.

“We cannot put up with this criminal and terrorist act of the Operation Dignity forces, so I defect from it and call on the eastern tribes and the people of Al-Bayda to resist the rule of the military that Haftar is trying to establish.” Al-Dersi told Al-Nabaa TV.

He added that the sixth anniversary of the 17 February revolution will not pass and Haftar is trying to control the city of Al-Bayda by force, saying that Al-Bayda residents will resist his ambitions of taking the rule of Libya into his own hands.

“We’re going to teach Haftar a lesson that he won’t forget.” Al-Dersi added.

He also referred to the crimes of Haftar’s son, Saddam, whom he said is using his father’s power to order the killing of civilians in Benghazi by ordering pilots to drop barrel bombs on residential buildings.

“All Al-Bayda residents, Al-Barasa and Al-Dersa tribes reject the evil and terrorist acts done by Haftar, Saddam Haftar and Ahmed Gharor.” He concluded.

Khalifa Hafar is reportedly in Cairo, in a secret meeting with the Head of the Presidential Council, Fayez Al-Serraj as part of an initiative to solve the current political impasse.

Likewise, Colonel Abdelsalam Al-Barasi, who is the military leader of the Green Mountain that is related to the control of Haftar’s Army Command, announced that he had defected from the “Libyan National Army Command” led by Khalifa Haftar, Al-Nabaa TV reported earlier.

According to Al-Nabaa TV, military vehicles and forces related to Haftar’s Operation Dignity were seen moving out from Al-Marij city, where Haftar’s command is located, heading towards Green Mountain city.