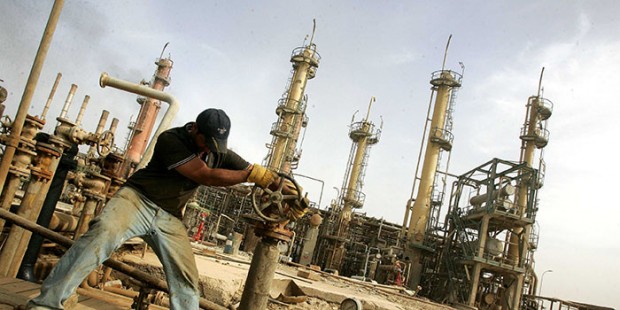 The Islamic State  threatens to seize Libyan oil refineries — and gain a major new revenue source — as the terror group expands its presence in the war-torn country.

Islamic State fighters have pushed toward critical port facilities near their Libyan stronghold of Sirte, according to a senior State Department official who was not authorized to talk publicly about the issue and asked not to be named.

Secretary of State John Kerry said Tuesday that the United States and its allies have made progress against the Islamic State in parts of Iraq and Syria but are concerned the militant group has spread into Libya.

“That country has resources,” Kerry said. “The last thing in the world you want is a false caliphate with access to billions of dollars of oil revenue.”

Kerry spoke in Rome where a coalition of 23 nations met to review their strategy to defeat the Islamic State, also known as ISIL or ISIS.

The militants are attempting to expand into Ras Lanuf and Brega, large refinery and export facilities east of Sirte, the State Department official said. Ras Lanuf came under attack by militants last month  in fighting that touched off a large fire.

The ports are no longer used to export oil, but the refineries there can process domestic supplies and store oil.

The Islamic State may be attempting to control the ports  to exert influence over Libya’s weak government and force it to make concessions, the official said. It’s unlikely the militants could use the facilities to export oil abroad, the official said.

Libya, once a major oil-producing country,  no longer pumps oil from its fields inside the country but continues to pull oil from offshore rigs. U.S. officials have met with Libyan government representatives to discuss ways of protecting the ports or moving stored oil out of the area.

If the ports fall under Islamic State control, it will be difficult to expel the terror group, since many of the chemicals used in the refining process are explosive.

It took months for Iraqi forces to push out Islamic State militants from Beiji, an Iraqi refinery.

If the militant group seizes control of the refineries in Libya, that poses another risk: a potential environmental catastrophe that could reach Europe if oil spills into the Mediterranean Sea.

Since a U.S.-backed coalition helped rebels overthrow the regime of Libyan leader Moammar Gadhafi in 2011, the country has spiraled further into chaos as rival governments  struggle for control.

The United States has few options to counter the Islamic State in Libya. It has targeted the militants with drone attacks and  sent special operations teams inside the country.

“There have been some U.S. forces in Libya trying to establish contact with forces on the ground so that we get a clear picture of what’s happening there,” Pentagon spokesman Peter Cook said.

The United States and its allies are attempting to get Libya’s rival factions to agree on a unity government, which could open up new opportunities for U.S. support.

Kerry said Libya was on the brink of establishing a new government.

Defense Secretary Ashton Carter said if Libya does form a government, “that gives us new opportunities,” including the possibility to support government security forces. A U.S.-led plan to train Libyan forces was suspended amid growing chaos in the country.

For: IS poses nightmarish threat to Libya’s oil facilities