Kobler: Weapons must go only to forces under Presidential Council’s command 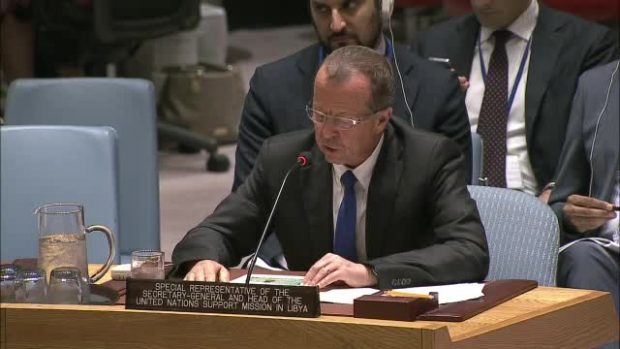 The UN delegate to Libya, Martin Kobler, said in the UN Security Council Libya session Monday that Libya is still without a formally endorsed government, pointing out that the implementation of the Libyan Political Agreement has stalled because some parties to the Agreement have failed to uphold their commitments.

Kobler clarified to the UNSC that the Tobruk-based House of Representatives has an integral role to play in Libya’s democratic transition, However, it must make progress in fulfilling its obligations under the Libyan Political Agreement to hold a vote on endorsing the Government of National Accord.

“However, I am concerned about the military situation in the country. The oil crescent region has witnessed a build-up of military formations. Libyan army units have moved into the area from the East. Forces under the Presidency Council have been engaged in clashes with Daesh in areas west of Sirte.” Kobler said in his statement to the UNSC.

He added that uncoordinated military actions on the ground have raised the specter of direct clashes between different forces fighting Daesh (ISIS), pointing out that the possibility of renewed military escalation in Libya should be a matter of grave concern for all.

“We must recognise, however, that Libya is a country awash with weapons – 20 million pieces of weaponry in a land of 6 million people. These weapons do not fall from the sky, but come in increasingly through illegal shipments by sea and by land. These arms fuel the conflict. These shipments must end if there is to be any serious hope of bringing peace to Libya. Weapons should only go to regular forces after approval by the Security Council sanctions committee.” Kobler continued.

“Libyans must not fight against each other. They must fight united against their common enemy.” He indicated.

For: Kobler: Weapons must go only to forces under Presidential Council’s command