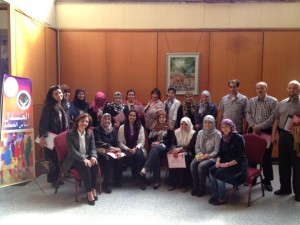 Human rights violations in their many forms have been taking place in Libya for a long time. Today the  media focus primarily on illegal detention and torture. Unfortunately, even Libya’s legislative and executive branches are practicing some human rights violations through their denial of citizenship to Libyan children of foreign fathers. A law remedying this was introduced back in 2010 (Law No. 24). However, given what it maintains are weakness of the legislation, the Ministry of Interior has refused to put into practice.

The issue is complicated further by widespread public opposition to granting citizenships to non-Libyans. This view arises because  Qaddafi made citizens of foreigners whose job was to oppress Libyans and safeguard his regime. Moreover, some fear thatLaw 24 will be abused by foreigners seeking to benefit from Libya’s economic resources. In Benghazi, approximately 3,000 mothers are seeking to grant their citizenship to their children.

This predicament these women and their children find themselves, is likely to become worse when subsidies for essential foods and gasoline will be lifted in the coming months, the be replaced by cash grants. Women married to foreigners do not have the Citizenship Family Book used by Libyans to obtain identification documents and therefore access financial assistance from the government. Thus the clear danger is that these people will be left to deal with the added burden of higher food prices to feed their families at a time when the Libyan economy is experiencing high unemployment.

A programme developed in cooperation with the Multicultural Organisation in Libyan Society (MOLS) and the Libyan Centre for Development & Human Rights (LCDHR) is seeking to resolve this problem. It is lobbying the government and other stakeholders to apply Law No. 24. MOLS believes in the values of a pluralistic society, in which citizens look to the common good.

Last April, a roundtable meeting of writers, judges, civil society members and women advocacy groups brainstormed ideas, strategies and plans to support Libyan mothers seeking to grant citizenship to their children. The roundtable discussion resulted in the formation of an eight-member lobbying committee and a thirteen-member advocacy group.

In May 2013 a three-day workshop on Lobbying and Nationality Right was led by Hanna Ziadeh, a Mideast international affairs expert. It included professional training on the workings of pressure groups and how to approach the right authorities. The workshop also focused on the specific theme of Libyan women’s right to have citizenship granted to their children.

As a result of both the roundtable discussion and workshop exercises, it became apparent to the activists that the present Libyan environment is not favourable for this specific issue. The activists point to the struggle to obtain a quota for women within the constitutional drafting committee ,and other difficulties they are face with a general atmosphere of discrimination. For these reasons the lobby committee will be focusing its efforts  to improve and apply Law No. 24 of 2010 on just two committees within the GNC – the Human Rights and the Legislation committees.