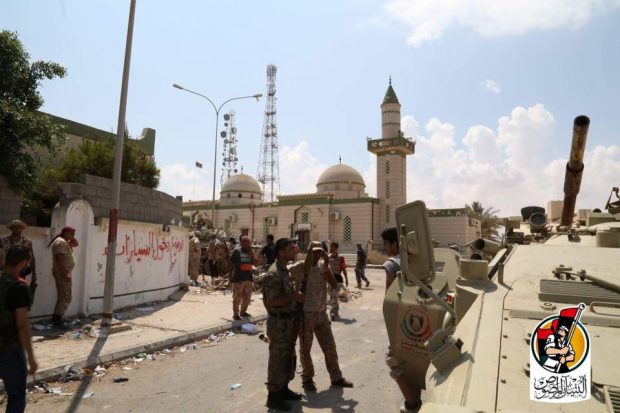 The Misurata-led forces appointed by the UN-brokered Government of National Accord (GNA) announced that they had seized most of the last hideouts of the IS militants in Sirte’s Neighbourhood 3, including three state buildings in the area.

Meanwhile, Misurata Central Hospital reported that the number of the fighters killed for Al-Bunyan Al-Marsous has grown to 10 and the number of injuries to 60, most of whom from Misurata, and others from Tripoli, Sabha and Zliten.

The media office of Al-Bunyan Al-Marsous also announced that it captured on Saturday a huge storage stuffed with foods and vehicles for IS terrorists.

“We’re now heading to free the Jizah district, which overlooks the sea in Sirte, fro those IS remaining militants.” A source from the media office of Al-Bunyan Al-Marsous indicated.

Started in May, the military operation has now achieved over 90% of the aim, which is killing and ousting the IS militants from the coastal city of Sirte.

In August, the US fighter aircraft joined the fight by the request of the GNA’s Presidential Council. The Pentagon decided last week to go for another month in the battle against IS terrorists in Libya to secure that they are a threat no more to the stability of the country.

For: Libyan forces corner IS radicals in a couple of nooks inside Neighbourhood 3