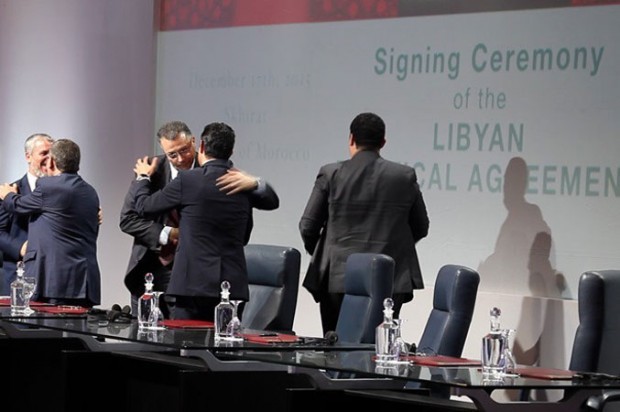 A UN-backed peace agreement to end the split between Libya’s two rival governments has run into trouble with one of the country’s two parliaments blocking a key clause.

The internationally recognised House of Representatives, meeting in the far eastern city of Tobruk, voted by an overwhelming majority to accept the peace deal but without a provision that would hand control of the armed forces to the UN-backed unity presidential council.

The legislators’ move aims to protect the position of hardline Tobruk army chief Khalifa Haftar, who is unacceptable to the rival Islamist-leaning administration, which controls the capital, Tripoli.

Martin Kobler, UN special envoy on Libya, welcomed what he called “the endorsement in principle” of the UN-brokered peace agreement, adding that he noted the reservation on the article regarding the presidential council taking responsibility for army command.

“We will continue consultations with all parties to find consensual solution to all outstanding issues,” Kobler said Monday.

The United Nations, European Union and other powers have been pushing for the deal to end Libya’s civil strife, which has allowed the Islamic State extremist group to establish a growing presence in the oil-rich North African state.

The parliament also withheld approval for a unity government proposed by the presidential council and backed by the UN and EU.

It instead asked the council to come back within 10 days with a smaller cabinet line-up, Benghazi parliamentarian Abu Bakr Baira told broadcaster Libya HD.

“Our indication is that they are voting in favour of the agreement with some conditions,” said Stephane Dujarric, a spokesman for UN Secretary General Ban Ki-moon, noting that the UN was monitoring the votes.

Under the peace agreement, the unity government had to be approved by the House of Representatives within 10 days of its announcement by the presidential council. That approval came on January 19.

Analyst Mattia Toaldo of the European Council on Foreign Relations said the vote on the cabinet had short-term implications, and the parliament might approve a revised line-up.

But blocking the handover of military powers pointed to a more serious issue, he said.

“In the long term, it demonstrates that you can’t work around the issue of Haftar. That’s what this is all about,” Toaldo told DPA.

“If you reopen the agreement [as requested by the House of Representatives] … then Tripoli will ask for other changes and you’re back to square one,” he warned.