Eight “threat to life” weather warnings have been issued in the UK as the coldest winter in 58 years is expected to hit the country.

The yellow warnings, which risk “severe or hazardous weather” that “has the potential to cause danger to life or widespread disruption”, have been issued by the Met Office across eight regions in Scotland and northern England. 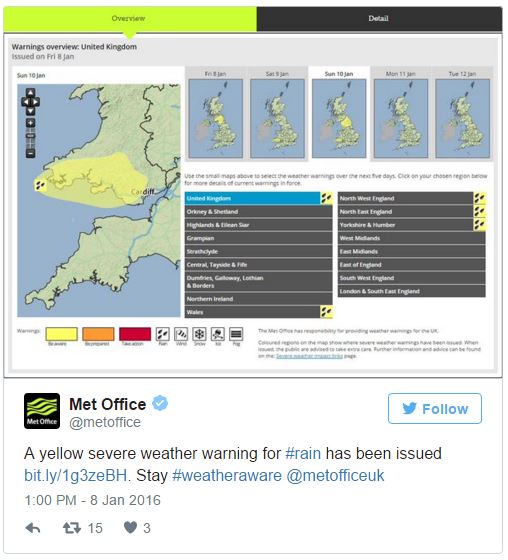 It added: “Further outbreaks of snow, mainly over hills, are likely to return to parts of northern England and southern Scotland during the early hours of Saturday.”

The Met Office have warned of difficult driving conditions and locals in Aberdeen and Dundee have been urged not to travel unless absolutely necessary.

The warnings come as the UK is braces itself for severe weatherthis weekend as the coldest winter in 58 years is expected to hit the country.

Experts have said the cold weather will be driven in from Siberia and the North Pole creating an Arctic-style freeze, which may bring flooding, freezing temperatures and difficult conditions to parts of the country already devastated by severe weather.

Some of the Arctic freeze’s first effects were felt yesterday as severe flooding caused havoc in Scotland after the River Don burst its banks, causing dozens of residents in Aberdeen to be evacuated from their homes amid flooding fears and affecting flights landing at Aberdeen Airport yesterday evening.

The severe weather is set to spread throughout the UK over the course of the weekend.

Earlier today the Environment Agency issued 20 flood warnings and over 100 flood alerts across the country.