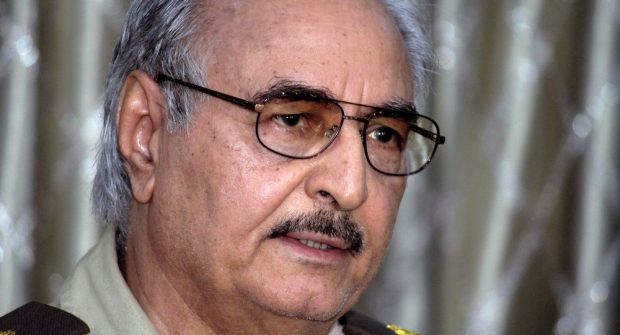 The commander of the Operation Dignity forces of the Tobruk-based House of Representatives (HoR) Khalifa Haftar arrived in Moscow Sunday to discuss military and weapons support for his forces in the east.

According to DEBKA website, The Russian President, Vladimir Putin, began to envision a second Mediterranean base on the coast of Benghazi, twin to Hmeimim in Syria’s Lattakia. This one would accommodate Russian naval as well as air units and be located 700 km from Europe.

Haftar is heavily backed by Egyptian, UAE and French military presence and equipment in all of its military operation, whether on the ground or in the sky.

“It was the leaders of Egypt, UAE and other countries supporting Haftar who urged him to accept the Russian invitation to Moscow and bid for military assistance.” DEBKA added.

This visit to Russia is Haftar’s second. He was there in June and met with Russian Defence Minister Sergei Shoigu and National Security Adviser Nikolai Patrushev, asking for military support and arms provision.

Haftar was a military leader at the time of Muamar Gaddafi’s war on Chad and he was caught as a captive and then taken by the US, where he lived as an opposition to Gaddafi in exile. He was rendered early this year as a CIA agent who is reluctant to follow the orders by one of the American official sources when he refused to endorse the UN-backed Government of National Accord.

Haftar launched an alleged war on terror in Benghazi under the name Dignity Operation back in May 2014. Since then he has been trying hard to have the upper hand in the eastern city of Benghazi and the region as a whole.

Operation Dignity forces seized the oil terminals in the oil crescent region back on September 11 and pushed the Petroleum Facilities Guard out after three years of their leader Ibrahim Jodran’s grip and shut down of the terminals.

For: Putin envisions military base on Benghazi coast as Khalifa Haftar arrives in Russia to request arms