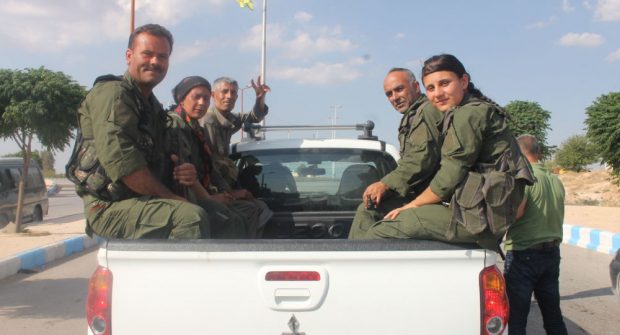 The United States has launched a major operation against the Islamic State of Iraq and the Levant (ISIL) near the Turkish border with the Syrian Democratic Forces (SDF), with Turkish sources confirming that the Turkish military has not taken part in the operation.

Still, the U.S. informed Turkey ahead of an offensive to capture a crucial swathe of northern Syria known as the Manbij pocket from ISIL, Turkish military sources have stated, without detailing exactly when the information was passed to Ankara. The massive operation to push jihadists out of the Manbij area was launched early on June 1 with the participation of the SDF, predominantly composed of the People’s Defense Units (YPG), the militia forces of the Kurdish Democratic Union Party (PYD).

U.S. Special Forces have long been advising and assisting the local groups who have been actively involved in the offensive around the Manbij area.

“This region is 40 km from Turkey’s border and therefore it is impossible for Turkey to provide support. It is also out of the question politically for Turkey to give support to a YPG operation,” a Turkish military source told Reuters on June 1.

Ankara has urged the U.S. to give priority to the Syrian Arab forces in their fight against ISIL inside Syria, with fears that the PYD could use the opportunity to legitimize its demands to create an autonomous region in the northern part of the country, near the Turkish border. However, U.S. officials talking to Reuters said the operation was “overwhelmingly comprised of Syrian Arabs rather than the Kurdish YPG, who will only represent about a fifth or a sixth of the overall force.”

But the Syrian Observatory for Human Rights, which monitors the war, said the YPG made up the majority of the fighters taking part in the assault by the SDF alliance, with the initial target of capturing Manbij town.

Military sources, meanwhile, said claims that Turkey had been lending support to the operation inside Syria have been “totally unfounded.” However, the same military sources admitted that Turkish artillery had shelled ISIL positions in northern Syria through its 40-kilometer range cannons, simultaneously with the Manbij operation. Sources stressed that airplanes of the anti-ISIL coalition had also provided air support to the Turkish shelling in regions of northern Aleppo.

They said 14 members of ISIL had been killed while one tank, two mortars, one headquarters, and three vehicles have been destroyed as a result of the offensive.