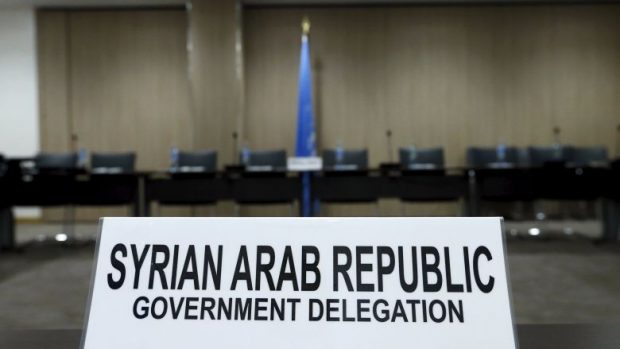 Mr Assad would then hand over power to a unity government that would run Syria for 18 months and organise elections.

But the Gulf kingdom’s foreign minister, Adel al-Jubeir, told the BBC that he was not optimistic that Russia and Iran were prepared to put the “necessary pressure” on the president “in order to comply with the will of the international community”.

Mr Assad has consistently refused to step down since the beginning of the war, which has left more than 250,000 people dead, and correspondents say the recent battlefield successes of his forces have only hardened that view.
Download Flash Player now
You need to install Flash Player to play this content.
Media captionSaudi Arabia FM is not optimistic about Syrian peace plan

The HNC’s “Vision for Syria” was unveiled in London by its general co-ordinator, Riyad Hijab, who defected in 2012 while serving as prime minister.

Six months of negotiations between opposition and government representatives, using a 2012 document known as the Geneva Communique as a basis for discussions. Both sides would also commit to a temporary truce, lift sieges, allow full humanitarian access and release detainees.

A transitional period lasting a year and a half would start with the establishment of a transitional governing body with full executive powers, as well as the departure of Mr Assad and other senior officials accused of committing “heinous crimes”. A new constitution would be drafted during this phase, and a democratic and pluralistic political system established.

Changes to the constitution would be agreed, the outcomes of a national dialogue implemented, and elections held under UN supervision.

Later, foreign ministers from the Friend of Syria group of countries that support the opposition will discuss the HNC’s proposals.

UK Foreign Secretary Boris Johnson, who is hosting the meeting, wrote in The Times that there “was still a chance that this vision can be made to work”.