Experts are worried that the virus is spreading far and fast, with devastating consequences.

The infection has been linked to cases of microcephaly, in which babies are born with underdeveloped brains.

The WHO alert puts Zika in the same category of concern as Ebola.

It means research and aid will be fast-tracked to tackle the infection.

There have been around 4,000 reported cases of microcephaly in Brazil alone since October.

“I am now declaring that the recent cluster of microcephaly and other neurological abnormalities reported in Latin America following a similar cluster in French Polynesia in 2014 constitutes a public health emergency of international concern.”

She said the priorities were to protect pregnant women and their babies from harm and to control the mosquitoes that are spreading the virus.

Dr Chan justified declaring an emergency even amid uncertainties about the disease, saying it was time to take action.

The WHO faced heavy criticism for waiting too long to declare the Ebola outbreak a public emergency. 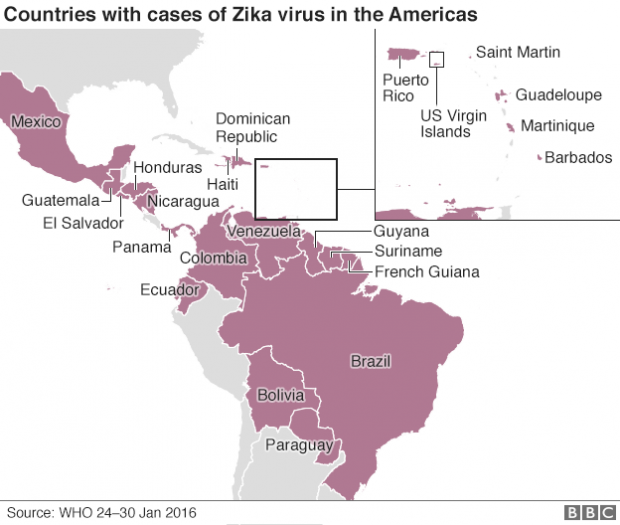 Currently, there is no vaccine or medication to stop Zika. The only way to avoid catching it is to avoid getting bitten by the Aedes mosquitoes that transmit the infection.

The WHO has already warned that Zika is likely to “spread explosively” across nearly all of the Americas. More than 20 countries, including Brazil, are reporting cases.

Most infections are mild and cause few or no symptoms, although there have been some reported cases of a rare paralysis disorder called Guillain-Barre syndrome.

The bigger health threat though is believed to be in pregnancy, to the unborn child.

Dr Jeremy Farrar, Director of the Wellcome Trust, said: “There is a long road ahead. As with Ebola, Zika has once again exposed the world’s vulnerability to emerging infectious diseases and the devastation they can unleash. Alongside the emergency response that Zika necessitates, we must put in place the permanent reforms, health systems strengthening and proactive research agenda that are needed to make the global health system more resilient to the threat of future pandemics.”

With their tenure coming to a close, PC voices alarm about the national budget being…

For: WHO announces “global emergency” to fight Zika virus outbreak