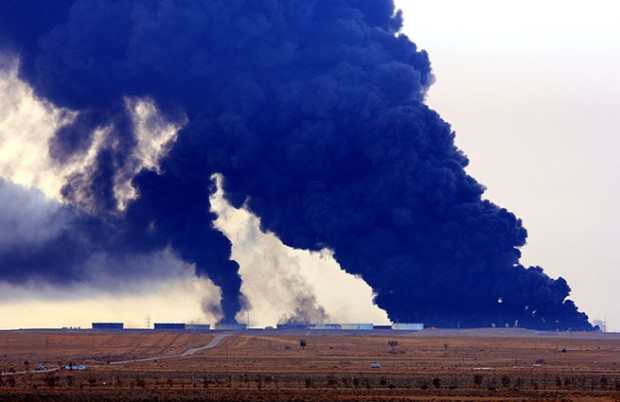 Since a NATO-led air war toppled the regime of Muammar al-Qaddafi five years ago, Western governments have kept their distance from Libya, even as it plunged into a disastrous civil war. But the country is back in the headlines, and for the first time since 2011, the United States and its European allies are once again drawing up plans for possible military action in Libya.

With a small population of 6.4 million and a territory of mostly empty desert, why is Libya causing so much international concern? The Islamic State. The group has grabbed territory in Libya at an alarming pace in recent months, with potentially dire consequences for North Africa, the Sahel region, and Europe.

Libya is only one of several countries — including in Egypt’s Sinai peninsula, Yemen, and Nigeria — where Islamic State militants have expanded their presence or forged an alliance with local extremists. But Libya has taken on an outsized importance because of its geographic location, its oil assets, ports  — and the swift advance of ISIS on the ground.

“ISIS didn’t control any terrain along Libya’s central coast this time last year,” said analyst Harleen Gambhir at the Institute for the Study of War.

Made up of Libyan veterans from ISIS in Syria and Iraq, the group initially was active in Derna, a hotbed of extremism. But exploiting a power vacuum in a country with two rival governments, the Islamic State has since seized 150 miles of territory along the central coast, with Sirte — Qaddafi’s hometown — serving as its stronghold. It has staged attacks on oil facilities, sent in senior ISIS figures to oversee operations, and imposed the same brutal brand of social control it has enforced in its so-called “caliphate” in Syria and Iraq.

Governments across the region are worried that if the country’s civil war continues and ISIS is able to extend its reach across the North African country, the militants could eventually seize control of Libya’s Mediterranean Sea ports, oil terminals and even border crossings. Off-shore platforms owned by Italian and other foreign oil firms would also come under threat. For Libya’s neighbors — Algeria, Egypt, Niger, Chad, Sudan, and Tunisia — an expansion of ISIS could allow the extremists to stage frequent cross-border attacks and stoke extremism in their own countries.

Tunisia, the one nation where the “Arab spring” had a relatively successfuloutcome, is seen as particularly vulnerable to the ISIS juggernaut. U.S. and European officials are keen to insulate Tunisia from the Islamic State threat. ISIS militants have staged attacks on foreigners in Tunisia over the past year in a bid to wreck the country’s vital tourism industry. And in November, the group claimed responsibility for bombing a bus carrying Tunisian presidential guards, leaving 12 dead.

Egypt also is nervous about its 700-mile border with Libya. A year ago, the Islamic State released a video showing the beheading of 21 Egyptian Christians in Libya. Cairo already is battling the Islamic State’s affiliate in Sinai to the east, and fears a worst-case scenario in which ISIS could seep across its western borders from Libya.

France and other European governments have repeatedly warned about the danger posed by ISIS in Libya, and that it has become a new magnet for foreign fighters. Not only does the extremist movement’s growing presence in Libya threaten to destabilize North Africa and the Sahel region, but it also threatens to fuel a refugee crisis engulfing Europe’s southern flank.

By virtue of holding Sirte, ISIS is a mere 220 miles from the Italian island of Lampedusa, where thousands of migrants and refugees have arrived after embarking by boat from Libya. French Defense Minister Jean Yves Le Drian said this month the Islamic State group could try to infiltrate operatives among refugees heading to Italy’s shores to try to stage more terrorist attacks in Europe.

America’s National Intelligence Director James Clapper told lawmakers this week that ISIS is “entrenched” in Sirte and is “well positioned to expand territory under its control in 2016.”

The remnants of Libya’s chemical weapons program also represent another potential danger. Libya was on course to destroy and dismantle its entire program but that project was interrupted by the rebellion that toppled Qaddafi’s regime. There is still a substantial stockpile of precursor chemicals in the country that could be converted into lethal chemical weapons.

Libya has Africa’s largest oil reserves and the oil industry has been a coveted prize in the civil war, as well as a key target for Islamic State. Oil production was at about 1.6 million barrels before Qaddafi was ousted in 2011, but it has since declined to less than 400,000 barrels a day. Merely by disrupting the production of oil, ISIS can ensure further instability and undermine any attempt to build up the authority of a central government.

With ISIS flying its flag over Sirte, U.S., French, British and Italian officials are weighing military options to include air strikes, and deploying small numbers of special operations forces to help local militias roll back ISIS. American and British commandos are already on the ground forging links with militia groups. Despite a myriad of risks and the absence of a coherent, reliable local force, U.S. military leaders are urging prompt action. “The longer this goes on, the more entrenched Islamic State becomes,” one senior officer told FP.

Any military action, however, may have to wait on the outcome of diplomatic efforts designed to persuade rival factions to agree on a national unity government. But the faltering political process has been plagued by acrimony and dragged on for months. The two factions vying for powersigned a U.N.-brokered deal in December to create a unity government, but have since fallen out over the composition of a cabinet. Egypt and the United Arab Emirates are backing the internationally recognized government based in Tobruk, in eastern Libya, while Turkey and Qatar have been accused of supporting the coalition of Islamists and other militia that have established themselves in Tripoli. In the meantime, ISIS is on the move, building its “province” on the southern Mediterranean.

The views expressed in Op-Ed pieces are those of the author and do not purport to reflect the opinions or views of Libyan Express.
How to submit an Op-Ed: Libyan Express accepts opinion articles on a wide range of topics. Submissions may be sent to oped@libyanexpress.com. Please include ‘Op-Ed’ in the subject line.
Foreign Policy
Share
Submit a Correction
Sign up for our Newsletter.

For: Why Libya matters again?