World is on the Improve, 4 New Charts Show

The new year is always a time for reflecting on what happened in the past year. But I think it’s worth stepping back and taking a look at the bigger trends shaping our world. I believe that most of what’s going on can be traced back to a few underlying processes. I’ve written about all of these before, but charts can help us visualize these. 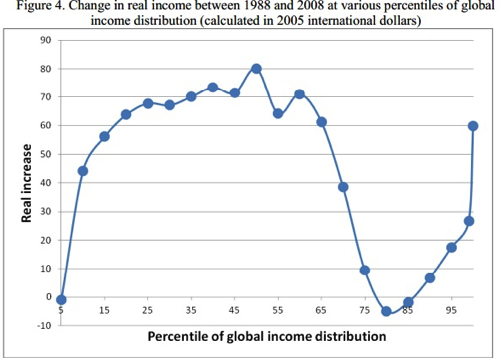 This chart is from a paper by economist Branko Milanovic. It shows how income has grown or shrunk for people at various rungs on the global income distribution, during the past two or three decades. You can adjust the beginning and ending years, but the same basic pattern will emerge.

Basically, most of the world has experienced absolutely huge gains. Except for the very poorest countries — any number of which are torn by civil wars or social upheaval — the world’s poor have become a lot less poor. This is true of people in middle-income countries such as Russia, Malaysia and Brazil, and of people in most impoverished African countries as well. And nowhere is it more true than in the newly industrialized China.

People at the top of the income distribution in rich countries — the executives, financiers and highly paid professionals in the U.S., Europe and developed East Asia — have also done very well. But the middle and lower-middle classes in these rich countries have not.

Those people — pipe fitters in Pennsylvania, auto workers in Italy, salarymen in Japan — are at the upper end of the global income distribution, but not quite at the top. It is these people — those at about the 80th percentile — whose income has stagnated or fallen while the rest of the world has powered forward. Even as the growth of poor countries has made the world more equal, the stagnation of rich-country middle classes has made the developed world less equal.

The culprit may be globalization, which exposed rich-country workers to a gigantic wave of competition from China and the rest. Or it might be some kind of technological shift that economists don’t quite understand. Some blame neoliberal policies and the death of unions.

But whatever the cause, this pattern is the most important fact about the global economy today. The rise of China and other countries has weakened U.S. and European hegemony, and the stagnation of rich-country middle classes may be behind the appeal of populists like America’s Donald Trump and France’s Marine Le Pen.

Charts 2 and 3: The Rise of Renewables 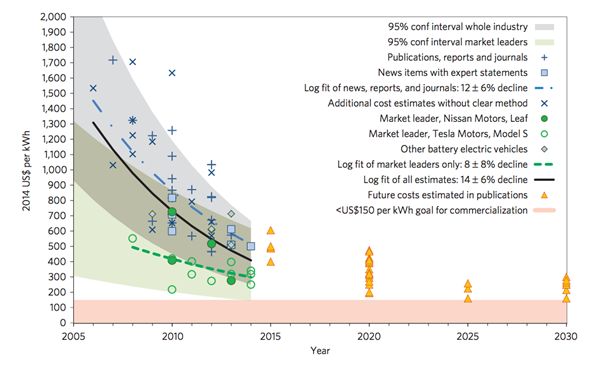 These are the two pieces to the global energy revolution. Solar power, after decades of being much too expensive to replace conventional electricity sources, has fallen exponentially in cost. That will allow countries to build solar farms instead of new coal- and gas-burning power plants. At first, the change will come in sunny locales, and in poor countries where energy is expensive. Eventually, though, almost every country will start building solar on a mass scale. The shift is already happening.

Batteries are the other piece of the renewables puzzle. They solve two huge problems — transportation, and electricity generation intermittency. You can’t really power cars with solar panels, so to replace oil as a fuel for ships and cars, solar will need some energy-dense storage medium like batteries. Also, solar panels can’t generate electricity at night, so batteries help solve this problem.

Importantly, both of these technologies are experiencing relatively steady cost reductions. That implies that progress is due not to huge new breakthrough technologies, but to learning curves. The more solar and batteries we build, the better we get at building them. That means that we don’t have to hope and pray for big breakthroughs — we just have to wait for the costs to fall enough.

Cheap renewable energy is a true revolution. It is as important as the tech revolution or the Green Revolution in agriculture. It will allow us to escape the yoke of scarce fossil fuels, and help us limit and contain the damage of climate change. Instead of having to choose between limiting our economies and protecting our environment, we are innovating our way out of our problems once again. The importance of this human triumph is difficult to understate. 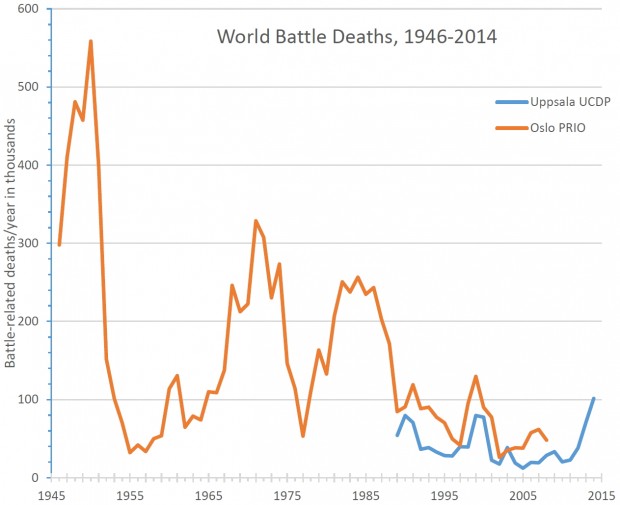 This chart, from the University of Uppsala’s Department of Peace and Conflict Research, shows how war has decreased since the end of World War II. The fall hasn’t been steady — conflicts in Korea, Southeast Asia, the Middle East and Africa have temporarily reversed the trend. But as psychologist Steve Pinker has found, almost any measure reveals a steady drop in conflict. Beyond saving lives, falling conflict yields huge benefits for the world. Countries in Africa and Southeast Asia are now free to develop economically.

The slow, uneven realization of world peace is one of the most important things that has ever happened to our planet. It remains to be seen if the trend is permanent — even now, the war in Syria is pushing the number of deaths back up. And there is always the looming danger of global thermonuclear war between the U.S., Russia and China. But charts like this show that world peace, while no certainty, is at least possible.

So our world today is getting better and better in several critical ways. Conflict, poverty and global inequality are falling, while technology is helping us defeat our biggest environmental threats. The only major blight on the global picture is income stagnation of the rich-country middle classes. That stagnation, if it continues, may well destabilize the world’s most powerful nations, threatening the other positive trends.

For: World is on the Improve, 4 New Charts Show