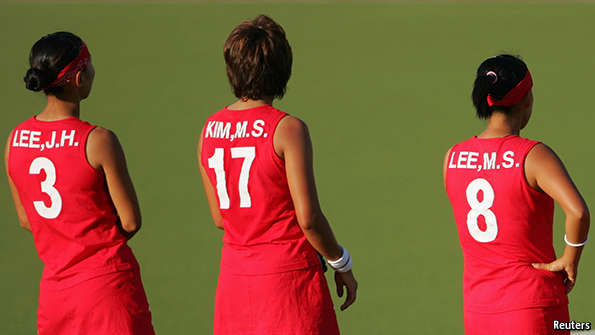 A SOUTH KOREAN saying claims that a stone thrown from the top of Mount Namsan, in the centre of the capital Seoul, is bound to hit a person with the surname Kim or Lee. One in every five South Koreans is a Kim—in a population of just over 50m. And from the current president, Park Geun-hye, to rapper PSY (born Park Jae-sang), almost one in ten is a Park. Taken together, these three surnames account for almost half of those in use in South Korea today. Neighbouring China has around 100 surnames in common usage; Japan may have as many as 280,000 distinct family names. Why is there so little diversity in Korean surnames?

Korea’s long feudal tradition offers part of the answer. As in many other parts of the world, surnames were a rarity until the late Joseon dynasty (1392-1910). They remained the privilege of royals and a few aristocrats (yangban) only. Slaves and outcasts such as butchers, shamans and prostitutes, but also artisans, traders and monks, did not have the luxury of a family name. As the local gentry grew in importance, however, Wang Geon, the founding king of the Goryeo dynasty (918–1392), tried to mollify it by granting surnames as a way to distinguish faithful subjects and government officials. The gwageo, a civil-service examination that became an avenue for social advancement and royal preferment, required all those who sat it to register a surname. Thus elite households adopted one. It became increasingly common for successful merchants too to take on a last name. They could purchase an elite genealogy by physically buying a genealogical book (jokbo)—perhaps that of a bankrupt yangban—and using his surname. By the late 18th century, forgery of such records was rampant. Many families fiddled with theirs: when, for example, a bloodline came to an end, a non-relative could be written into a genealogical book in return for payment. The stranger, in turn, acquired a noble surname.

As family names such as Lee and Kim were among those used by royalty in ancient Korea, they were preferred by provincial elites and, later, commoners when plumping for a last name. This small pool of names originated from China, adopted by the Korean court and its nobility in the 7th century in emulation of noble-sounding Chinese surnames. (Many Korean surnames are formed from a single Chinese character.) So, to distinguish one’s lineage from those of others with the same surname, the place of origin of a given clan (bongwan) was often tagged onto the name. Kims have around 300 distinct regional origins, such as the Gyeongju Kim and Gimhae Kim clans (though the origin often goes unidentified except on official documents). The limited pot of names meant that no one was quite sure who was a blood relation; so, in the late Joseon period, the king enforced a ban on marriages between people with identical bongwan (a restriction that was only lifted in 1997). In 1894 the abolition of Korea’s class-based system allowed commoners to adopt a surname too: those on lower social rungs often adopted the name of their master or landlord, or simply took one in common usage. In 1909 a new census-registration law was passed, requiring all Koreans to register a surname.

Today clan origins, once deemed an important marker of a person’s heritage and status, no longer bear the same relevance to Koreans. Yet the number of new Park, Kim and Lee clans is in fact growing: more foreign nationals, including Chinese, Vietnamese and Filipinos, are becoming naturalised Korean citizens, and their most popular picks for a local surname are Kim, Lee, Park and Choi, according to government figures; registering, for example, the Mongol Kim clan, or the Taeguk (of Thailand) Park clan. The popularity of these three names looks set to continue.