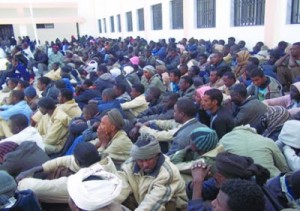 No fewer than 172 Nigerian migrants, including 6 women, have been repatriated to Nigeria from Libya.

The International Organization for Migration, IOM, said almost all the migrants were detained as they were trying to cross to Europe.

Despite ending their journey of hope inside detention centres, the IOM added that these migrants considered themselves lucky to have escaped death on the Mediterranean, which this year had taken the lives of 97 migrants and refugees on the route linking Libya to Italy.

It was also disclosed that in the light of the current unstable situation in Libya, which caused migrants many physical and psychological problems, about one hundred forty-two had spent months in immigration detention centers.

The repatriation was reportedly done in close cooperation with Libyan authorities, Nigeria’s Embassy in Tripoli and the IOM office in Nigeria.

A chartered flight carrying the Nigerians which departed Tripoli’s Mitiga Airport on Friday and arrived in Lagos yesterday.

They were received and screened by various agencies such as Nigeria Immigration Services, NIS, Police and the National Agency for Protection and trafficking in Persons, NAPTIP.

Confirming the deportation, the Public Relations Officer, PRO, NIS, Mr Ekpedeme King told newsmen in Lagos on Saturday that the Nigerians were returned home for overstaying their visas, among other immigration offences.

“Some Nigerians were deported today for immigration offences.

“Most of those returned overstayed in Libya,” the PRO confirmed.