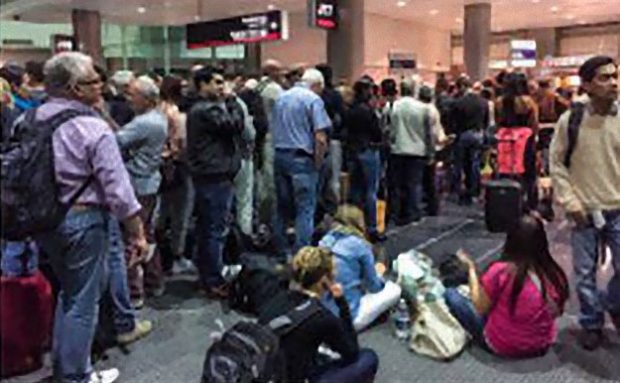 A total of 16 Keralites, including children, who were stranded in war-torn Libya, returned to India on Thursday.

29 Indians, including five infants in the age group of one and half and two years and a pregnant nurse, have been rescued from Libya, with nine families belonging to Kerala and three to Tamil Nadu. It was an emotional homecoming for the people who hugged their loved ones amid tears as they emerged from Nedumbassery airport at 10.30 am.

The flight carrying the 16 persons landed here at 8.30 AM this morning, after which they completed immigration formalities. The relatives of the rescued Indians had been patiently waiting since the early hours and there were cries of relief as they spotted them.

A nurse from Kerala, Sunu Sathyan, and her one-and-half year-old son Pranav had been killed in a rocket attack in the violence hit Zawiya city of Libya on March 25. Following this, other Indian nurses also working in the the hospital had decided to leave the area.

“I was in the same hospital. After the incident we moved to a shelter owned by a Libyan,” said a member of the group who identified himself as Abraham.

Most nurses claimed that though they had got in touch with the office of External Affairs Minister and Chief Minister Oommen Chandy’s office, there was no help.
One of the nurses, hailing from Kozhencherry, said she and her three member family were in Libya for the last five years.

“We were unable to withdraw money from banks due to the situation there. Chief Minister Oommen Chandy called us to ask about our plight,” she told reporters.

The stranded Indians had travelled from Tripoli to Istanbul and then to Dubai to arrive at Kochi this morning, he said.

There are totally 11 children, five of them infants in the age group of one and half years and two, Kannan said.