Syria: UN warns of over 300.000 civilians cut off supplies in Aleppo

Up to 300,000 people could be cut off from food supplies if Syrian government forces encircle rebel-held parts of the northern city of Aleppo, the UN says.

A road from Turkey used by the World Food Programme to reach eastern Aleppo was blocked last week after the government launched a major offensive.

The agency currently has an alternative route, but it may soon be severed too.

The UN is also calling on Turkey to let in some 30,000 people stranded on its border who have fled the fighting.

Aid workers say facilities at the border have been overwhelmed, with people forced to sleep outside in the bitter winter weather.

Aleppo, once Syria’s commercial and industrial hub, has been roughly divided since 2012, with the government controlling the western half and rebel factions holding the east.

Eight days ago, the Syrian army and allied militias, backed by Russian air strikes, began an offensive north-west of Aleppo that swiftly broke a long-running siege of two pro-government towns and severed a key rebel supply route into the city.

They then advanced towards the Turkish border, and by Monday were reportedly only 25km (16 miles) away – the closest they have been since late 2013.

The Syrian war and Aleppo 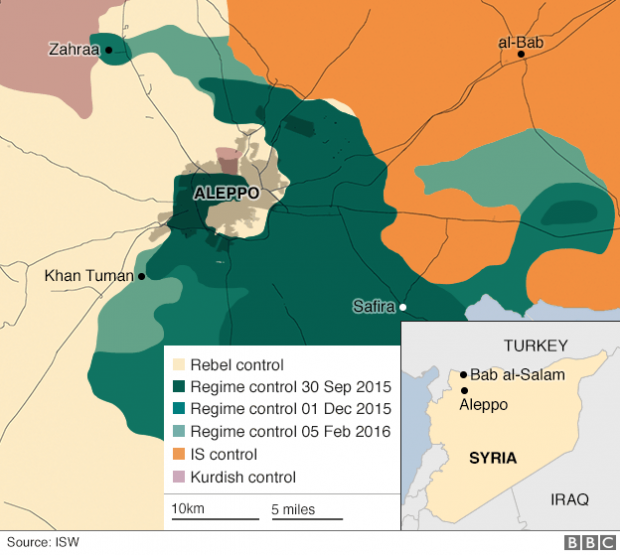 March 2011: Anti-government protests erupt across Syria, but Aleppo is initially untouched as a result of a state crackdown

February 2012: As the rebellion turns into a conflict, clashes between rebels and the government are reported with increasing frequency in Aleppo province

July 2012: The battle for Aleppo begins. Rebels make swift advances, but are unable to consolidate their gains and the city becomes divided

September 2015: Syria launches a fresh offensive in the wake of Russia’s intervention in the conflict

February 2016: The government captures towns north of Aleppo, threatening to encircle the city

Rebels and opposition activists said they feared the government would soon attempt to sever their last route into eastern Aleppo from Turkey, which runs from the western Bab al-Hawa crossing.

The government has employed so-called “starve or surrender” tactics elsewhere in the country to regain rebel-held territory, most notably in the central city of Homs.

The UN Office for the Co-ordination for Humanitarian Affairs (OCHA) warned that such a move might leave up to 300,000 people cut off from humanitarian aid, unless access could be negotiated.

The WFP also said it had begun food distribution at camps near the town of Azaz for the wave of newly displaced people gathered near the Bab al-Salam crossing.

The UN refugee agency meanwhile called on Turkey to immediately allow them in.

“However, many people are not being allowed to cross the border, and we are asking Turkey to open its border to all civilians from Syria who are fleeing danger and seeking international protection, as they have done since the start of this crisis.” 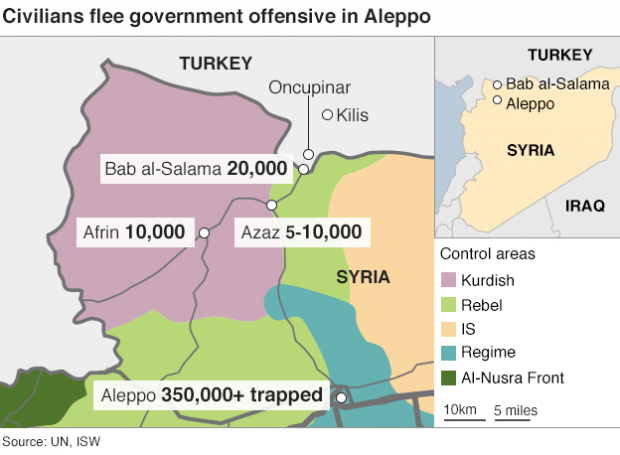 Turkey’s Foreign Minister Mevlut Cavusoglu said it had so far let in 10,000 of those waiting at Bab al-Salam, and would continue to do so in a “controlled fashion”.

Turkey has accepted 2.5 million refugees since the uprising against President Bashar al-Assad almost five years ago.

The Syrian government’s assault around Aleppo also helped derail UN efforts to convene talks in Geneva aimed at finding a political solution to the conflict, which has killed more than 250,000 people and driven 11 million others from their homes.

For: Syria: UN warns of over 300.000 civilians cut off supplies in Aleppo