Most social media marketers will tell you that video marketing is their priority in 2016. In 2014, global mobile video traffic grew by 55% and we can expect to see a similar statistics for 2015 as December wraps.

Video marketing is no longer a “nice-to-have”. Over the course of a couple of years, this content medium has become a “must-have” and brands need to adapt. We at Simply Measured have felt similar pressures to adopt the video medium and have seen an increasing demand via Twitter, Facebook, etc. Videos are tough. They can be time consuming. As you can see below, it’s one of our least utilized content type, but our second-most engaging on (and this is just on Twitter).

Since we’re well in the throws of this video endeavor, we decided to compile 5 of the biggest things we’ve learned from creating and promoting social media videos over the past couple years. Check them out:

You won’t know what resonates with your followers until you try it all. Every audience’s preferences are different, so make sure you don’t just copy the blueprints of brands that have come before you. Give yourself time to attempt and fail and then attempt (and fail) some more. In doing this, you’ll be able to establish multiple different baselines for various styles of video. This will reveal which styles and formats of video are actually effective and resonating with your audience.

2. Don’t Sleep on the Details

When it comes to videos, it’s all about watch time and audience retention. Both of these metrics can be affected by extremely minor and seemingly insignificant details, like a thumbnail or a title scene. For example, at Simply Measured we have an intro / title scene that is roughly about 5 seconds at the beginning of each video. As you can see below, audience retention during that time is slightly below average.

However, this metric then recovers as more people than average continue to stay tuned in throughout the video. These are simply things to be mindful of as you go forward and look to tweak your videos to optimize for watch time, audience retention, etc.

It’s all about timing. On YouTube, we’ve found that videos we time with an announcement or product release outperform more scheduled and nuanced content. The standard search algorithm rules apply… a certain topic sees a spike in searches as a result of news, more views for your video follow. For example, take this video discussing Instagram’s new Boomerang app in comparison to a video discussing 5 hacks to get more engagement from Instagram. 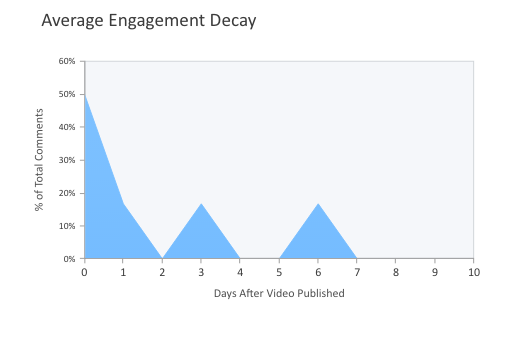 So, seeing spikes for both of these videos in the first two weeks makes complete sense, but the size of the spikes are extremely significant. These videos were promoted very similarly, however the timely one amassed much more watch time days after it’s release. Like I said, timing is everything!

One of the best parts about video on social is that it gives you an unique opportunity to showcase your brand’s personality. This is a medium that you’re allowed to get a little more silly with, rather than a LinkedIn post or a Tweet. Give your brand a face! For example, our top-performing video of all time was our holiday video from last year. As embarrassing as it is for me to surface this video again, it’s worth showing you all just how goofy you can get while crushing your previous watch time, audience retention and social sharing benchmarks.

5. It’s All About the Playbacks

The best way for your video to amass playbacks is for it to get good visibility within the YouTube platform itself. Obviously promotion of your video will go a long way, however YouTube’s platform has the ability to resurface your video for interested viewers. Playback location is a crucial part of a video’s success. For me, my goal is to increase our YouTube watch page playbacks to the point where YouTube is doing the promoting of the videos for us. One of our more successful videos had nearly an 50-50 distribution.

Playback location is crucial for the reach and scope of your videos, as well as the popularity of your brand’s channel as a whole. Keep an eye on this with every video you produce!

For: 5 Things You Can Do To Make Your Social Media Videos Better