No tsunami warning was issued after the quake, measured at a preliminary magnitude of 6.4.

The earthquake struck at 21:26 (1226 GMT) east of Kumamoto city, on the island of Kyushu, the Japan Meteorological Agency says.

The Sendai and Genkai nuclear plants on Kyushu are reported to be operating as normal.

No casualties have yet been confirmed though police in Kumamoto prefecture say people may be trapped in collapsed houses.

The quake struck at a depth of 10km (6.2 miles) and was followed 40 minutes later by an aftershock measuring 5.7. 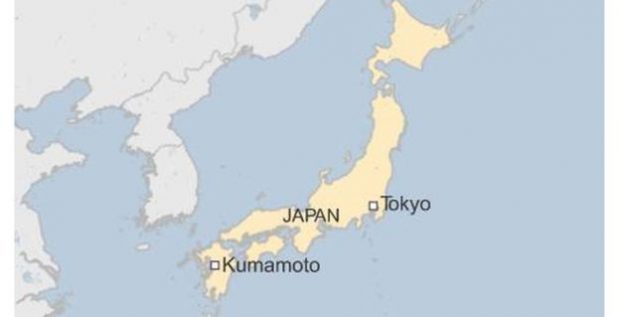 An official in Uki, a city in Kumamoto prefecture, told the Associated Press news agency that the walls of some houses had collapsed, in addition to part of the city hall’s ceiling.

Japanese state broadcaster NHK said a fire had broken out at a building in Mashiki, another town in the prefecture.

It also reported (in Japanese) that one woman had been found unconscious, in a serious condition, under a collapsed building in Mashiki.

Some train services were suspended as a precautionary measure.

Japan is regularly struck by earthquakes but stringent building codes mean that damage usually does not occur.

A magnitude 9 earthquake struck northeast Japan in March 2011, triggering tsunami waves in a double disaster that left more than 18,000 people dead or missing and led to meltdowns at the Fukushima Daiichi nuclear plant.