A new Libya is possible: here’s how we can move forward

Since the 2011 revolution and military overthrow of Colonel Muammar Gaddafi, Libya has been fighting for its life, flailing in a sea of seemingly unending conflict. I worked as technical systems analyst at the Ministry of Finance during the Gaddafi regime. I watched Libya descend into chaos. I saw how tyrannical ambitions, combined with poor statecraft and bureaucratic misrule, inflamed tensions and fuelled the civil war. However, in 2019 – after years of tit-for-tat warfare – it looked like hope was on the horizon. Regrettably, however, circumstances changed for the worse. I realised then the need for an alternative, more civic-minded strategy. I will explain what I mean, but before I do, it’s important to understand how we got here.

General Khalifa Haftar, head of the Libyan National Army (LNA) and Fayez Al-Serraj, head of the United Nations-backed Government of National Accord (GNA), entered into peace talks in February 2019. It was around this time that the then UK ambassador to Libya, Frank Baker, helped to broker a viable deal between the two parties. During these discussions it was suggested that I might have a major role to play in the new government. The agreement fell through though, and in April Haftar proceeded to launch his siege on Tripoli, which to him had become a den of ‘terrorists and militias’ who neither heeded nor respected Serraj’s authority. Initially, Haftar’s offensive was tacitly supported by a number of Western countries, including France (who supplied his forces with arms) and the US. However, as the months passed and other foreign powers, such as Qatar, the UAE, and entities associated with Russia, entered the fray, it became painfully apparent that Haftar was not making any real progress.

Spurred on by the UN, who feared that Libya was moving closer to total social and economic collapse, diplomats scrambled to bring about an end to the violence. Meetings were held all over the world, from Geneva to Cairo. Exasperatingly, none of these talks resulted in any long-lasting changes, and in December 2019 Turkey – seeing an opportunity to protect its interests in the Eastern Mediterranean – joined forces with the GNA.  Steadily, the tide began to turn; while the rest of the world prepared to batten down the hatches and brace for the COVID-19 deluge, GNA fighters – now with Turkey’s significant support – routed LNA soldiers on the outskirts of Tripoli.

On 28 May, the Atlantic Council’s Kirsten Fontenrose said that ‘Haftar’s team’ was ready to negotiate a ceasefire under the 5+5 plan originally put forward during the January 2020 Berlin Conference (which had abruptly come to a close after Haftar refused to agree a peace deal). About two weeks later, Egyptian President Abdel Fattah el-Sisi announced the Cairo Declaration, a peace proposal backed both by Haftar and his major ally, the United Arab Emirates. This proposal was flatly rejected by both Serraj and Turkish president Recep Tayyip Erdogan, and the fighting resumed. Meanwhile, a coalition of Mediterranean nations and NATO member states, such as Greece, Egypt and France, began to grow increasingly uncomfortable about the rising importance of Turkey’s role. On 17 June, for instance, France accused the country of violating Libya’s arms embargo. Turkey’s recent actions, said one French ministry official, ‘are not contributing to any de-escalation’.

Obviously, there is a dire need to try something new. Foreign actors on all sides of the conflict, including Qatar, Russia and the UAE, have only magnified Libya’s problems and increased destabilising tribal rivalries. Huge numbers of lives have been lost. Countless people have been kidnapped and enslaved. Libya has had enough. Our people are tired of taking sides and score-settling. We’ve heard time and time again that a political situation is the only way forward, and for the most part that’s true. What I’m advocating is neither pro-GNA nor pro-LNA. It’s something different: a new way forward.

Ultimately, the Libyan people and the world need a reformed, internationalist Libyan state, a unified nation led by democratically elected officials. Of course, Rome wasn’t built (or in this case, rebuilt) in a day. An interim unity government must be formed, but to do that certain steps must be taken to ensure a balanced transition. First, all powers must abide by the arms embargo as recommended by the UN Security Council. Second, there should be no more foreign boots on the ground. This can be achieved through the agency of the US and the UK, which exert unparalleled influence on global public opinion. It’s also worth remembering that modern Libya was established by the Americans and the British. In my view, these nations should continue to play a formative role in Libya’s future.

Led by a prime minister with chief executorial powers, the interim government itself would be technocratic and entrepreneurial, resembling that which has already been proposed by the likes of Jason Pack and Ethan Chorin. It would also be necessary to use economic initiatives to de-incentivise gangsterism, which is a major contributing factor in the Mediterranean migrant crisis. At the moment, many ordinary Libyans are impoverished, and private businesses are suffering. Additionally, unemployment has led to a rise in human- and fuel-trafficking, both of which are highly profitable.

Significant and drastic steps must therefore be taken to address these issues. I would suggest that the new government disburse several billion USD in cash directly to the Libyan people. Libya already spends about seven billion dollars a year on subsidised goods and fuel. Under the current subsidies system, which has long been criticised for facilitating organised crime, anyone can purchase fuel at a very low rate and smuggle it abroad. Thus, it may be possible to reduce a great deal of corruption by replacing the subsidies system with direct cash injections. Since the government would be injecting dollars into the economy, it should also float the Libyan dinar to mitigate inflation and black-market manipulation of the exchange rate.

Throughout this entire process, transparency and accountability would be paramount, so it would be preferable to re-locate the top executives of Libya’s oil and banking institutions to a neutral city that has strategic harbour ports and existing infrastructure. The city should also be close in proximity to Benghazi and Tripoli. In this environment, policymakers and their personnel would be a safe distance away from the corrupting influence of powerful local interests. Lastly, in this new framework, day-to-day governance in the new Libya would be de-centralised and collaborative; officials would work alongside local authorities and law enforcement to resolve provincial issues.

All in all, what I am proposing won’t be easy. Nonetheless, I truly believe that now is the time for Libyans to take control of their destiny by pushing for a civic, liberal, and popular society as opposed to one bound by extreme and outdated dogmas. That’s why, earlier this year, I formed the Libyan Democratic Institute. I want to promote new ways to think about Libya and blaze a path for this new way forward. Libya has had too many ‘brain-dead’ proposals. The country has incredible potential; it’s been a centrepiece of Mediterranean geopolitics for millennia and I have no doubt that its people are ready for something new. As before, I remain willing to work towards finding a genuine, robust, and peaceful solution. The country needs real change, and the time to act is now. 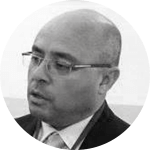 Moin Kikhia
Founder and President of the Libyan Democratic Institute

For: A new Libya is possible: here’s how we can move forward