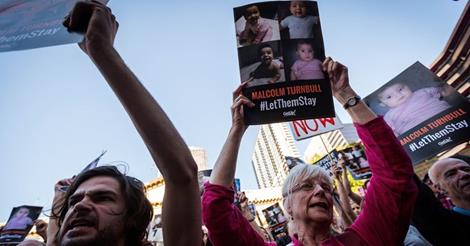 A baby at the centre of an asylum row in Australia has been released from hospital into community detention.

But the government says baby Asha will be sent to an offshore camp in Nauru once she is well.

Doctors refused to discharge the one-year-old, who was being treated for serious burns, unless she was provided a “suitable home environment”.

The standoff sparked protests outside Brisbane’s Lady Cilento Hospital in support of the doctors.

Asha will now stay with her family, including her mother, in community detention. An immigration officer will monitor the family and their movements will be restricted.

Immigration Minister Peter Dutton said she would be sent to the offshore processing centre on Nauru once her medical treatment was complete and the legal issues surrounding the circumstances of her injury resolved.

“We are not going to allow people smugglers to get out a message that if you seek assistance in an Australian hospital, that somehow that is your formula to becoming an Australian citizen,” he told the Australian Broadcasting Corp.

“I couldn’t be any clearer – once the medical assistance has been provided and the legal issues resolved, people will go back to Nauru.”

Mr Dutton denied the move was prompted by the protests and said it was pre-planned.

Earlier, Mr Dutton had told reporters: “The advice I have received is the doctors from the hospital have said the baby’s treatment has concluded and they would be happy for the baby to go out into community detention.

“That’s what we have proposed all along but at some point, if people have matters finalised in Australia, they will be returning to Nauru.”

But refugee advocates hailed baby Asha’s release into the community as a victory against the government’s hard-line detention policy.

In early February, the High Court upheld Australia’s asylum policy as legal under the country’s constitution.

The ruling paved the way for around 267 people, including 37 babies, to be deported to Nauru.

Mr Dutton also reiterated Prime Minister Malcolm Turnbull’s rejection of an offer from New Zealand to take in a quota of asylum seekers.

“The deal that was struck was a back-door option to come to Australia,” he said on Monday.

“It was a failed proposal under former prime minister Julia Gillard and that is why it is not acceptable to us in the form that Julia Gillard brokered it.”

For: A one-year-old asylum baby to be deported by Australian authorities