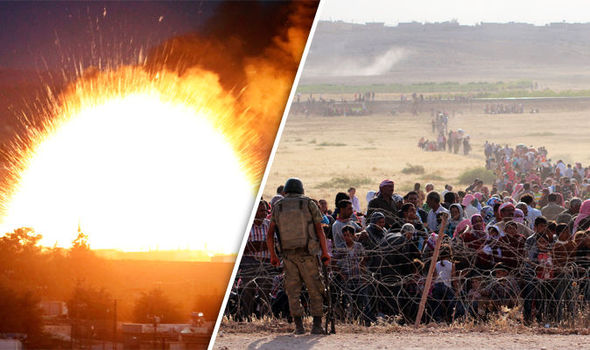 Air strikes on a camp for Syrian refugees near the country’s border with Jordan have killed at least 17 people and wounded at least 40.

It is unclear if the strikes on Tuesday at Hadalat, a makeshift camp for internally displaced people in Syria’s southern desert, were carried out by Syrian or Russian warplanes.

However, a senior Western diplomat confirmed the incident to Reuters news agency and said initial information was that several Russian jets conducted the raids.

Activists said that the camp was targeted because some people there have family members who belong to Asoud Al-Sharqiya, a US-backed rebel group operating out of Jordan.

The desolate strip, close to where the borders of Iraq, Syria and Jordan meet, has two major camps with a population of at least 60,000 people who have been stranded there since fleeing central and eastern Syria.

The kingdom declared its border area a closed military zone after a suicide bomber, believed to be from the Islamic State of Iraq and the Levant group (ISIL, also known as ISIS), last month drove from the Syrian side near one of the two camps and rammed the vehicle into a Jordanian military base, killing seven border guards.

The refugees have been running out of food since the Jordanian army sealed the area, international relief workers and refugees said last month.

For: Airstrike near Syria’s border with Jordan kills over 17 refugees in camp