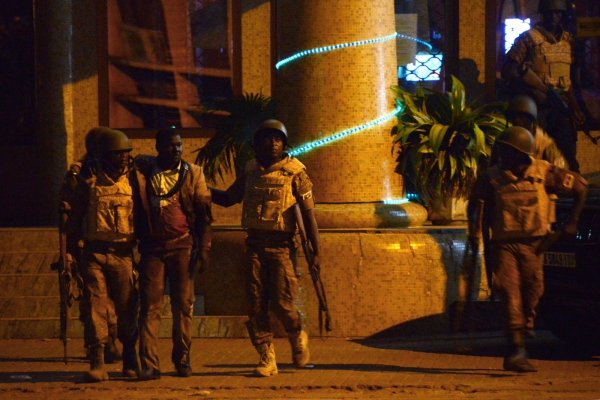 Al Qaeda in the Islamic Maghreb, often seen as a fractured and undisciplined group, apparently has carried out its second major terror attack in two months — claiming more than 20 lives in the assault on a luxury hotel and two other targets in Ouagadougou, the capital of Burkina Faso.

The gun attack on the Splendid Hotel bears many similarities to that on the Radisson Blu hotel in Bamako, Mali, on November 20 in which 22 people were killed.

Both targets were popular with Westerners and international (especially U.N). officials; they were “soft,” rather than military installations or police stations. The attackers (two in Bamako, possibly four in Ouagadougou) were armed with automatic weapons, their aim to kill and then take as many hostages as possible.

And both operations apparently were carried out by an AQIM group called Al Mourabitoun.

The group’s statement after the latest attack claimed the Splendid Hotel was “frequented by staff of the nations of global disbelief;” the attack was “to punish the cross-worshippers for their crimes against our people in Central Africa, Mali, and other lands of the Muslims.”

A very similar statement followed the Bamako attack, which was revenge for the “assaults of the Crusaders on our people, our sanctities, and our mujahideen brothers in Mali.”

But while Mali has seen dozens of terror attacks by AQIM over the years, this is the first time the group apparently has extended its operations to neighboring Burkina Faso.

In a region already reeling from terrorist violence and racked by instability, it’s an ominous portent of AQIM’s rejuvenated ambition. As intelligence analysts Flashpoint Partners write: “This is the first claim of credit by a major al Qaeda branch for an attack in Burkina Faso, which indicates an alarming growth in the group’s transnational reach.”

Another sign of AQIM’s renewed vigor was its audio statement this week urging Muslims to expel Spain from its two enclaves in North Africa — Ceuta and Melilla — and to attack foreign occupiers in Libya.

“The Italians and Romans have occupied the land once again, and most important after faith is pushing them away, deterring them, and expelling them from our lands,” says the head of AQIM’s “Council of Dignitaries,” Abu Obeida Yusuf al-‘Annabi, according to a translation by the SITE Intelligence Group.

AQIM is recovering from a sequence of divisions and defeats in recent years. After various AQIM affiliates swept across northern Mali in 2012, seizing nearly half the country, intervention by the French and several African militaries pushed them out of cities such as Timbuktu and Gao and back into remote desert regions.

But the vast Sahel desert and its mountain ranges were (and are) a refuge for AQIM commanders like Mokhtar Belmoktar, the most infamous and dangerous of AQIM leaders. Belmoktar is leader of Al Mourabitoun, which carried out another deadly hotel attack in the Malian town of Sevare last August in addition to the Bamako and Ouagadougou attacks.

The one-eyed Belmoktar has been declared dead many times, most recently by Libyan officials after a U.S. airstrike in eastern Libya last summer, but has defied the odds. It’s been 12 years since he was designated as a global terrorist by the United States, with a $5 million reward on offer for information about him.

Belmoktar has survived because of the vast distances and empty landscapes of the Sahel: the rugged Algerian-Malian border is as long as the distance from New York to Chicago. With the French military intervention in Mali, he is thought to have moved farther east — to the triangle where Algeria, Niger and Libya meet.

Originally from southern Algeria, Belmoktar knows the Sahel like a smuggler, which is what he was. He became known as Mr. Marlboro for his prowess in smuggling everything from cigarettes to drugs and migrants through the empty and unforgiving landscapes. He is also thought to have raised tens of millions of dollars through ransoms for Westerners kidnapped in Mali and Niger, some of which has been spent in the weapons bazaars of Libya.

His activities were too much for Abdelmalik Droukdel, the overall leader of AQIM, who is said to have demoted Belmokhtar in 2012 from his position as “‘Emir of the Sahel.” Citing regional security officials, Agence France Presse reported at the time that Belmokhtar had been dismissed for “continued divisive activities, despite several warnings.”

Undaunted, Belmoktar announced the formation of an elite unit called “Those Who Sign With Blood,” which would be the shield against the “invading enemy” — meaning France. “This is a promise from us that we will fight you in the midst of your countries and we will attack your interests,” he said in a message released late in 2012.

And in January 2013, his fighters launched an attack on a gas plant at In Amenas in southern Algeria. A three-day siege left nearly 40 foreign workers dead.

Belmoktar’s fighters have since attacked a military academy and French uranium mine in Niger. Some intelligence sources also connected Belmoktar to the attack on the U.S. diplomatic compound and annex in Benghazi in September 2012, in which Ambassador Chris Stevens and three other Americans were killed.

Exploiting a void of security

The Bamako attack in November marked Belmoktar’s homecoming to AQIM after three years of estrangement. Droukdel announced it had been a joint operation and declared the integration of the two groups.

Only last week, Jemal Oukacha — leader of the Sahara branch of AQIM — said he had formed a Shura Council with Al Mourabitoun to develop a “unified strategy” focusing on targeting “Crusaders” inside and outside Mali, and the French in particular.

AQIM operates in a region where state authority is frequently weak, intelligence resources limited and security forces often ineffective. Burkina Faso recently experienced an attempted military coup. It is not difficult for groups such as Al Mourabitoun with its resources to infiltrate a squad into a city like Ouagadougou or cross long thinly-populated borders such as the one dividing Mali and Burkina Faso.

AQIM — and Belmoktar — matter to al Qaeda as a bulwark of support in an area where the Islamic State in Iraq and Syria (ISIS) has ambitions, and new affiliates. ISIS has three wilayat or provinces in Libya, budding support bases in Algeria and Tunisia and the nominal allegiance of Boko Haram in northern Nigeria. One faction within AQIM also opted for ISIS, but not Belmoktar.

“We confirm our commitment and loyalty to the pledge of allegiance to [al Qaeda leader] Sheikh Ayman al-Zawahiri,” his group announced in May last year. Oukacha — the leader of AQIM in the Sahara — also emphatically rejected the “Caliphate” last week.

After a dramatic downturn in the group’s activities in 2014, a rejuvenated AQIM is demonstrating its expanded reach. Bad news for the West and for weak African states — but not great news for ISIS, either.