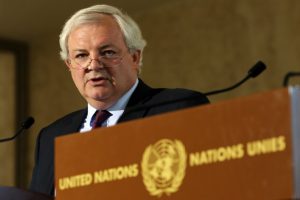 Syrian city of Aleppo are enduring a “living hell”, the UN humanitarian chief has said, as fighting rages on.

Stephen O’Brien urged the warring parties to allow the evacuation of hundreds of people who need urgent medical care.

It allowed government troops to gain ground in the north of the city.
Hours later, the Syrian army offered rebel fighters safe passage if they evacuated eastern Aleppo.

“The army high command calls all armed fighters in the eastern neighbourhood of Aleppo to leave these neighbourhoods and let civilian residents live their normal lives,” said a statement, carried by state news agency Sana on Sunday.

“The Russian and Syrian military leaderships will guarantee safe passage for the fighters and will give them aid as necessary.”

The government made a similar offer in July, but the rebels ignored it.

For: Aleppo is a living hell, said UN Humanitarian Chief