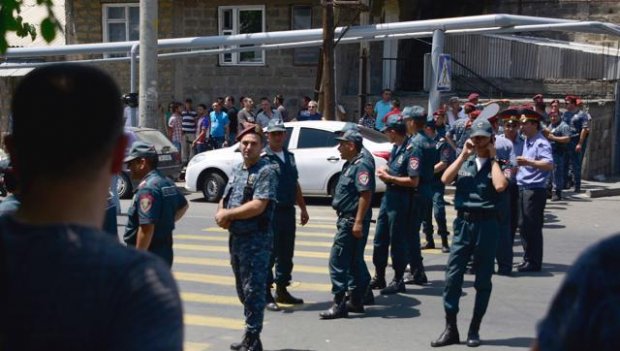 About 20 armed men who seized a police station in the Armenian capital, Yerevan, have surrendered, police say.

The men seized the building nearly two weeks ago seeking the release of “political prisoners” including opposition leader Jirair Sefilian. A police officer was shot dead from inside the police station during the stand-off on Saturday.

The shooting came as police issued a deadline for the anti-government group to surrender. When the deadline passed, thousands of protesters again took to the streets in support of the group. The Interfax news service said all of those inside the police station had now been detained.

Mr Sefilian, a former military commander, has criticised the government’s handling of the long-running conflict involving pro-Armenian separatists in the region of Nagorno-Karabakh. Police issued an ultimatum to the group to surrender following violent scenes late on Friday when police with truncheons and stun grenades clashed with protesters.

About 60 people were injured, including some journalists, and more than 100 arrests were reported..

Three gunmen were also wounded on Friday, apparently shot in the legs by police snipers. Two of them were escorted to hospital under armed guard. The group seized the police station on 17 July, killing one policeman and taking several hostages.

They released a video demanding the release of Mr Sefilian and a number of others, and urging supporters on to the streets.The CivilNet newspaper identified the group as the Daredevils of Sassoun.The group had said it would retaliate if attacked.

Nagorno-Karabakh lies within Azerbaijan but has an ethnic Armenian majority. A bloody war erupted after the end of Soviet rule in 1988, and there has been frequent unrest since, the latest in April, when clashes left dozens dead.