The suspected surviving bomber in the Brussels attacks has admitted the group was initially planning a new attack on France, Belgian prosecutors say.

Mohamed Abrini said the group had decided to attack Brussels instead after the arrest of fellow suspect Salah Abdeslam.

He also reportedly admitted being the third bomber in the airport attack, fleeing without setting off his device.

Gun and bomb attacks in Paris on 13 November killed 130 people.

A further 32 were killed in the attacks on an airport and metro station in Brussels on 22 March.

Both attacks were claimed by the Islamic State group, based in Syria and Iraq.

Abrini, who was arrested in Brussels on Friday, reportedly told interrogators that the arrest of Abdeslam on 18 March had prompted the plotters to change track.

Surprised by the speed at which police were closing in on them, the group had “finally taken a hasty decision to hit Brussels”, prosecutors quoted Abrini as saying.

Abrini, a 31-year-old Belgian of Moroccan origin, was charged with terrorist activities along with three other men on Saturday.

Prosecutors said earlier he confessed to being the “man in the hat” – the missing third airport bomber seen in CCTV video.

“He said that he had thrown away his jacket in a rubbish bin and sold his hat after the attack,” the statement added.

There was no immediate comment from the suspect’s lawyer.

A Belgian-based expert on Europe’s jihadists, Pieter Van Ostayen, has thrown doubt on Abrini’s confession to being the bomber at Zaventem airport, suggesting he may be covering for the actual attacker.

However, facial recognition tests confirmed Abrini as the man in the CCTV footage on seven out of nine points, French TV channel LCI reports, quoting police. 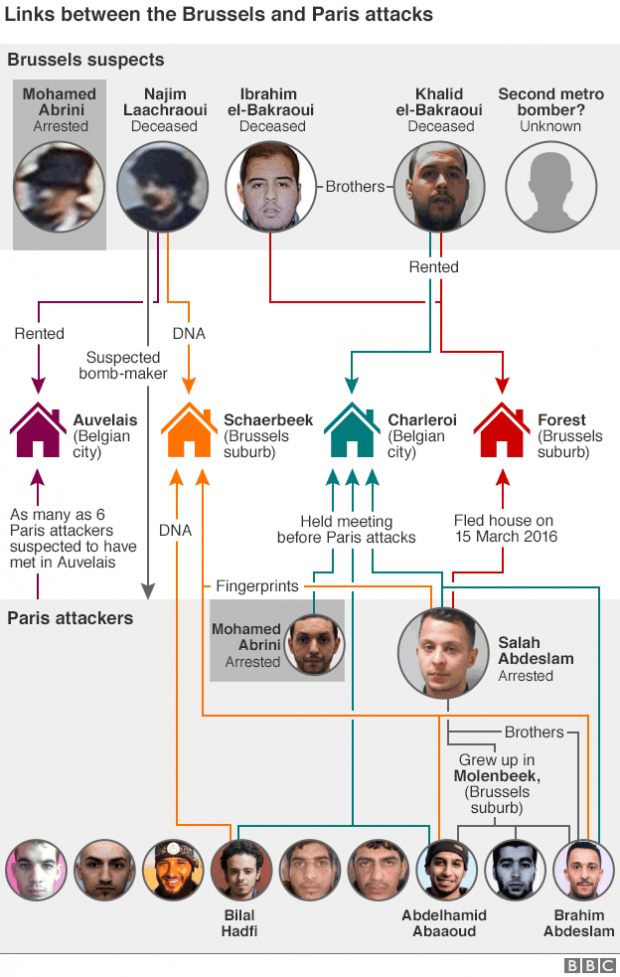 According to investigators, Abrini’s fingerprints and DNA were found in two “safe houses” in Brussels, as well as in a car used during the Paris attacks.

Abrini is also said to have been filmed at a petrol station with Abdeslam two days before the Paris attacks.

Abdeslam’s alleged role in the attack on the French capital has yet to be established but his brother Brahim was one of those who blew themselves up.

Investigators believe Salah may have driven the three bombers who attacked the Stade de France to their destination, and may have been tasked with an aborted attack a short distance away, after which he fled to Belgium.

The three other men charged on Saturday by Belgian prosecutors have been named as Osama K, Herve BN, and Bilal EM.

They also say that he bought bags used by the two bombers who struck at Zaventem airport on the same day.

For: Arrested Brussels attackers confess they wanted to attack France