Australian military forces will have NO role in Libya 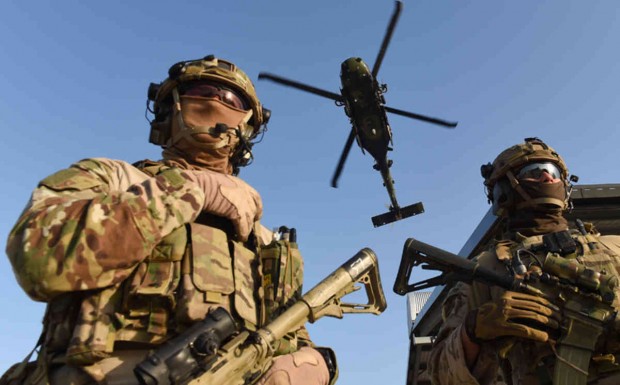 The Turnbull government is right to rule out any role for Australian troops in Libya and equally to rule out any increase in the number of our troops involved in the fight against Islamic State in Iraq and Syria.

Similarly, the government was also right to increase financial aid to Jordan.

Part of the catastrophic failure of Europe in this crisis was a chronic underfunding of nations­ which have sheltered huge numbers of fleeing Syrians­, especially Lebanon, Jordan and Iraq.

This contributed directly to the surge in people fleeing to Europe, though many of those did not come directly from the camps in bordering nations.

US Secretary of State John Kerry has declared that Libya is on the brink of producing a government of national unity but that this is threatened by the infiltration of Islamic State and fighters loyal to it into Libya.

He has called for a vigorous Western ­response, including a hard-edged military component.

Foreign Minister Julie Bishop has reiterated that “absolutely no more troops from Australia” will be involved and has instead called on Middle East countries to take a greater role in answering the challenge of Islamist extremism.

Malcolm Turnbull and Bishop are right in their strategic judgments. Libya has been a catastrophe since the fall of dictator Muammar Gaddafi in 2011.

Welcome as his departure was, the result has been chaos, civil war, nearly a failed state and the spread of Islamist extremism.

A great deal of the weapons of Gaddafi’s former army have found their way into the hands of Islamic State, al-Qa’ida and other extremist groups across North ­Africa and the Middle East.

At first the Libyan experiment in liberalisation looked promising. But, as with most revolutions, a ­bewildering series of allegedly governing bodies led to national splintering.

There is an ever-shifting series of alliances between tribal and sometimes Islamist militias, which are violent and lawless.

The emergence of groups loyal to ­Islamic State, as well as other Islamis­t groups, has caught Washington’s attention, because there is the real prospect of Islamic State setting up another branch of the caliphate and winning control of potentially billions of dollars worth of oil revenue.

Two reflections suggest themselves. First, the Western bombing campaign of 2011, strongly supporte­d by the Australian government­ at the time, was a mistake­ — no matter how well-intent­ioned. It was intended to stop Gaddafi from slaughtering civilian­s in ­Beghazi but was expanded into a general campaign to bring about regime change.

The regime collapsed but nothing effective took its place.

There is nonetheless every reason for the US to involve itself in Libyan affairs to ensure Islamic State does not establish a new territorial­ base. But prudence dictates­ strict limits to the nature of US involvement.

It can provide money and advice­ to the relative moderates it can find, and in limited circumstances military air support in defence­ of regime survival.

But there is no credible role for US ground troops, and even less of a role for Australian forces.

For: Australian military forces will have NO role in Libya