Bashar Al-Assad vows to retake the whole country, U.S. says he is deluded

Assad’s comments, made just hours before agreement reached in Munich over cessation of hostilities, deal blow to hopes of negotiated solution to war

Bashar al-Assad has dealt a swift blow to international efforts to secure a ceasefire, deliver aid and promote a negotiated solution to the war in Syria, vowing to regain control of the entire country and warning that it could still “take a long time”.

The Syrian president was speaking to the AFP news agency in Damascus on Thursday, hours before an agreement was reached in Munich on arranging a cessation of hostilities and the urgent despatch of food, medicines and other supplies to hundreds of thousands of civilians in besieged areas.

Assad said his armed forces would try to retake all of Syria but added that the involvement of regional players “means that the solution will take a long time and will incur a heavy price”. He warned of the possibility of direct intervention by Turkey and Saudi Arabia, who back the rebels.

However, the US state department said Assad was “deluded” if he thinks there is a military solution to the war in Syria.

The Saudi foreign minister, Adel al-Jubeir, said on Friday that Assad’s removal was vital to defeat Islamic State. “We will achieve it,” he told the Munich security conference.

“It might take three months, it might take six months or three years – but he will no longer carry responsibility for Syria. Period,” he later told newspaper Sueddeutsche Zeitung.

Assad said it would be possible to end the war “in less than a year” if rebel supply routes from Turkey, Jordan and Iraq were cut. The signs are that Russian airstrikes, which were not mentioned in the Munich statement, are helping him achieve that goal. “The main battle is about cutting the road between Aleppo and Turkey, for Turkey is the main conduit of supplies for the terrorists,” he added.

Russian aircraft were seen in action in northern Syria again on Friday.

The Syrian leader affirmed his readiness to talk – but he offered nothing to the forces who have been seeking to overthrow him since 2011. “We have fully believed in negotiations,” he said. “However, if we negotiate, it does not mean that we stop fighting terrorism. The two tracks are inevitable in Syria.”

The spirit of his comments was familiar, but the defiant tone does not augur well for the implementation of the fragile and tentative agreement drawn up by the International Syria Support Group, comprising the US, Russia, Britain, Iran, Saudi Arabia and others – some of Assad’s staunchest backers and most determined enemies.

Initial efforts to plan aid deliveries were under way on Friday at the UN headquarters in Geneva, where a new Task Force on Humanitarian Access in Syria was being chaired by Jan Egeland, adviser to the UN’s Syria envoy, Staffan de Mistura. “Once we get clearance by concerned parties, the UN and its humanitarian partners will be able to reach the civilians in need within the coming days,” de Mistura said. 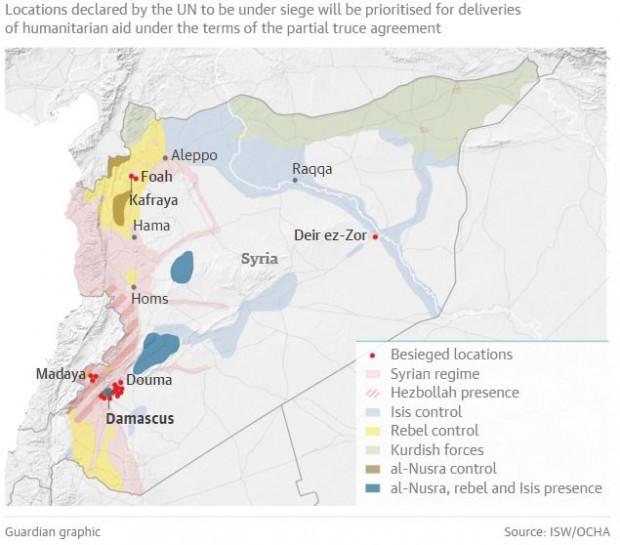 De Mistura suspended the fledgling Syria peace talks after just three days on 3 February. Plans to resume them on 25 February were still “cloudy”, said UN spokesman Ahmed Fawzi, who told a briefing in Geneva: “Politics is the art of the possible”.

Jan Eliasson, the UN’s deputy secretary general, described the Munich agreement as a “brake” on the conflict, but not a “breakthrough”.

Humanitarian access was urgently needed, warned Robert Mardini, regional head of operations at the International Committee of the Red Cross.

David Miliband, head of the International Rescue Committee, condemned the delay to a ceasefire. “You don’t wait a week for an emergency operation and the people of Syria should not have to wait a week for relief from bombings. We wait with eager anticipation to see whether this agreement is a turning point or a false dawn.”

Members of Syria’s moderate, western-backed opposition reacted cautiously to the agreement to pause hostilities, saying they did not trust Russia to keep its end of the bargain and halt an intense aerial campaign responsible for the most significant advances by forces loyal to Assad since the start of the civil war.

The advance has so far displaced 51,000 civilians and placed 300,000 more at risk of being placed under siege in Aleppo, according to UN officials, who described the humanitarian situation there as grotesque.

Rebels also questioned the real impact of the deal on the ground, since it excludes the al-Nusra Front, al-Qaida’s affiliate in Syria, which operates in large swaths of the country.

Issam al-Reis, a spokesman for the Southern Front, a western-backed rebel alliance fighting close to the Jordanian border, said: “We greet this announcement with tentative optimism. However, we are sceptical that Russia will hold to these commitments when its current policy is to indiscriminately bomb all parties in Syria into the dust, in particular civilians and moderate opposition, and with complete impunity, while saying they are bombing terrorists.

“We are waiting for real action, we have now lost faith in words without real action.”

The opposition High Negotiations Committee welcomed the plan but warned that the agreement must show benefits before any resumption of the talks in Switzerland. “If we see action and implementation, we will see you very soon in Geneva,” said spokesman Salim al-Muslet.

The Southern Front says Russia has conducted about 50 airstrikes a day on its positions since the end of November, a pace unparalleled since the start of the war, and Moscow’s intervention last autumn – advertised as a campaign against Islamic State – has mostly targeted the mainstream opposition.

For: Bashar Al-Assad vows to retake the whole country, U.S. says he is deluded